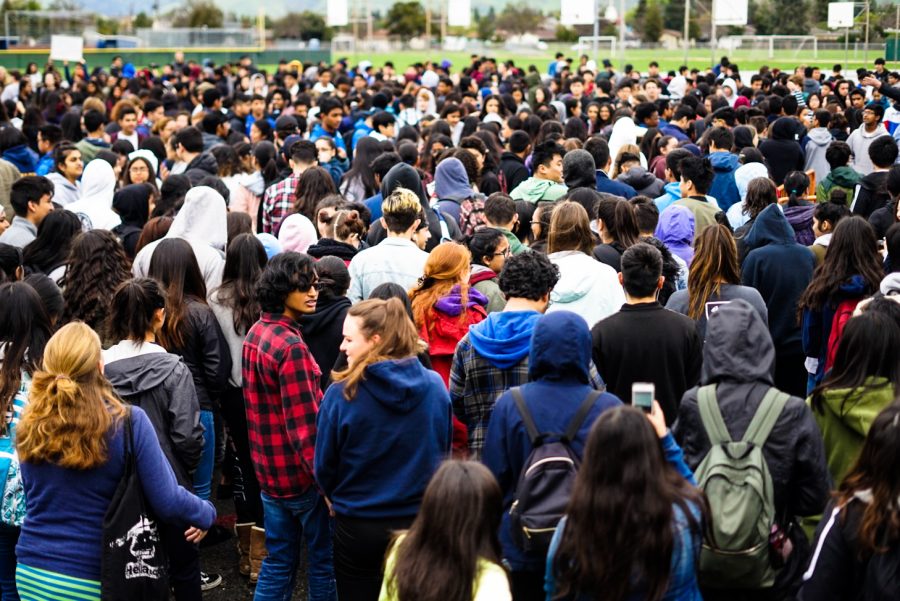 Hundreds of Irvington students march to the black top to protest gun violence.

Hundreds of Irvington students, along with select teachers, participated in the National School Walkout during advisory on Wed. March 14, in light of the one month-anniversary of the Marjory Stoneman Douglas High School shooting. The 17 minute walkout in remembrance of the 17 students who died during the shooting, featured student speakers, Riya Kataria (10), Joanna Li (11), and Geoffrey Zhang (9), who prepared speeches advocating for tangible actions, such as greater gun control, instead of thoughts and prayers.

“When I started reading the news on the 14th of February, I became really emotional,” Li said. “Seeing how these kids have developed over the past month and how they are trying to stand up for what they believe in really moved me.”

“I do have very strong opinions on the issue of gun control, but today wasn’t about me,” Dr. Steward said. “It was about the students and their voice and making sure that they felt they had the support of the staff to express that.”

Student opinions regarding the walkout were varied. Several students believed the event was an important opportunity to show youth activism and to seize control of the discussion surrounding gun-control.

“A lot of young people don’t register to vote at all,” Zhang said. “Seniors should register and vote. It’s important and your voice matters. For the rest of us, we can spread awareness.”

On the other hand, other students believed the event was poorly organized. They voiced that it did not aptly cover opinions that disagreed what the Associated Student Government listed as one of the purposes of the event, “raise awareness for gun control.”

Andrew Witty, a member of the Young Americans for Freedom Group, which is a high school national group that brings together students to advocate ideas such as a limited government and individual freedom, wished that his group had an opportunity to speak.

“As a group, we wish that we were given a chance to speak up a little more,” Witty said. “We just stood there and if we said something, there could have been backlash or unintentional intimidation.”

In preparation for the event, Irvington’s Associated Student Government partnered with Principal Melsby to create a walk-out that is safe and appropriate for the school.

“We had to be extremely considerate and open minded because we know that there are people who are against increased gun control, and so we just had to make it seem like we weren’t forcing anyone to participate,” ASG Outreach Executive Yeemon Kyaw (12) said. “But if they wanted to, they could come. We tried not to say that ASG hosted it, but more like sponsored the event.”

Prior to the walk-out, Principal Melsby clarified that students had the option to abstain from participating in the walk-out.

“It’s the students’ right to either remain in class and do work or to participate in the walkout,” Melsby said. “But students must be supervised, so the first priority is to make sure that students have the choice and that they have an environment in which to work.”