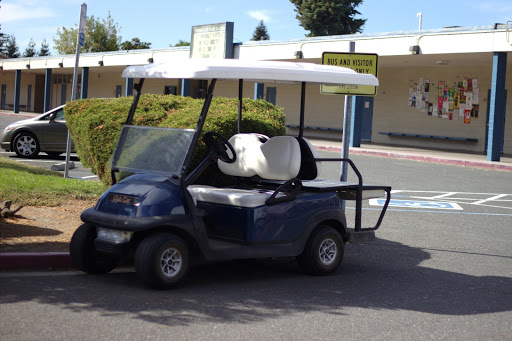 With the unprecedented frequency and violence of recent mass school shootings, Irvington administration and Fremont police have joined forces in implementing preventative actions to minimize risks to students and faculty. Several of these actions were taken over the summer, including trauma kit training for Irvington staff members, updated police equipment and cruisers, varying lockdown drill times, and stricter enforcement of parking permits.

“We are trying to be more vigilant when it comes to people not parking where they’re supposed to,” said School Resource Officer Luevano. “It helps us keep an eye on cars that are not supposed to be here.”

According to Irvington administration, observation is key in dealing with school threats. Students must be aware of suspicious activity, including any signs that might lead to mass hoaxes. For instance, several recent bomb threats, specifically one against Irvington, have been sent out to schools in the district, causing some schools to shut down and evacuate everyone on the campus.

“If we get one of these threats, especially if it goes on social media, we try to push out as much information as we can to the other schools, especially if we don’t know where the threat is directed to,” said Officer Luevano. “If we’re able to figure out that it’s not a legitimate threat, and is a hoax, we want to get that information out to the other police departments so that they can get to those schools, and those schools can get back to their normal functioning in each campus.”

Students are encouraged to report such suspicious activity to any school staff, not only about mass incidents like bomb threats but also about concerns for their fellow students and peers.

“I think that students need to tell somebody if they have concerns about someone’s mental health,” said Fremont Police Chief Kim Peterson. “After all, students know other students best. They need to take these concerns to a trusted adult immediately. Think in advance and have a plan.”

“If you see something, say something,” Levano agreed. “I rely a lot upon what others see. When someone brings something to my attention, I like to act on it.”

In addition to new parking rules and responses to threats, new improvements have been made to safety and security equipment on campus. Officer Luevano discussed district-wide improvements made to Fremont school resource officers’ gear and cruisers.

“We’ve updated our equipment in each of our cars,”said Officer Luevano. “I have access to different kinds of weapons and tools that would assist me at making sure that I can respond to a critical incident and handle that critical incident better.”

Officer Luevano frequently plans and attends meetings with the district’s SROs to discuss any local incidents and figure out the best ways to cope with them and similar events in the future. Along with security equipment, safety equipment has also been improved to encompass emergencies such as natural disasters.

“The red emergency backpacks are an upgraded emergency preparedness bag,” said Campus Supervisor Michele Hartmangruber. “We have to update our contents every so many years, so everyone got a brand new bag this year. Inside, it’s also upgraded. It’s got a crowbar, or pry bar in it, and work gloves, in case we had to dig out in the case of an earthquake. [The backpack] is a hands-free model, as opposed to a duffel bag.”

Teachers were taught to utilise the bag’s contents in a half-day trauma kit training workshop led by first responders and police officers that took place over the summer. The first responders discussed topics such as the Run, Hide, Fight Policy and the new Crisis Response.

“When it was designed, the idea was that it would really be hands on, so you would have an opportunity to actually perform a lot of the first aid kinds of things,” said Assistant Principal John Honerkamp. “I think it’s a direct result of what’s been happening in our society and in schools in particular. And the reality is we need to be prepared for these things.”

“I think that the training, although not perfect, was a good wake up call for all of us if we have to be prepared for something really bad,” said History and Psychology teacher Mrs. Faitel. “You have to make a decision. Do you run away? Do you hide? Do you fight off an attacker?”

As another alternative safety measure, some Fremont schools, such as American High School, have chosen to become closed campuses, where students are prohibited from leaving their school campus, even during lunch or other scheduled recesses, until the school day is over. However, Irvington staff has shown their concern for such changes.

“The structure of our school is such that people can still come in,” said  History and Psychology teacher Mrs. Faitel. “I’m not sure it actually solves the problem completely. It may keep kids on campus during lunch time, but I still think we won’t keep outsiders out. We would have to make dramatic changes to make it a closed campus.”

Hartmangruber agreed. “There are pros and there’s a lot of cons [to a closed campus]. And for this particular campus, in order to be able to house upwards of twenty three hundred students, on campus, feed them, and make sure that they have adequate shelter, it would not be possible considering the way our campus is set up right now.”

Even without a closed campus, supervisors are working to improve the safety of an open campus.

“We’re doing it by patrol,” said Hartmangruber,. “Aand by sightings. We have 47 acres, so this is a very large campus. Officer Luevano — he’s fantastic for us, he’s constantly walking around and keeping an eye out. [Campus supervisors] drive around on the golf cart, and sometimes, people will call and say that they see something a little bit odd, and we’ll go down and check it out.”

While the administration, district, and police department are enforcing policies to prevent tragedy on campus, they want to remind students of their own role in keeping the campus safe.

“It’s important that students keep their eyes up and alert instead of just down at their phones,” said Hartmangruber.

“Conversation, talking about the awareness, is the first step, and [the next is] making sure everyone on campus is paying attention,” said Principal Melsby. “It’s a constant conversation that leads to improvements that help the overall climate of feeling safe.”