Tall Girl Isn’t Much of a Tall Tale 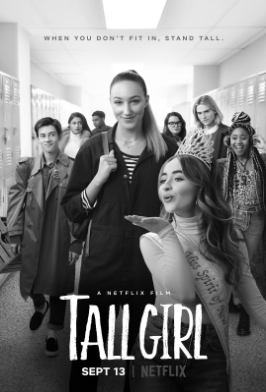 The moment the trailer for the Netflix original Tall Girl released, it received backlash from viewers online, specifically for the opening dialogue, “You think your life is hard? I’m a high school junior wearing size 13 Nikes. Men’s size 13 Nikes. Beat that.” To which one brave individual on Tik Tok responded with, “I have cancer.”

The cast includes Ava Michelle, Sabrina Carpenter, Griffin Gluck, Luke Eisner, Angela Kinsey, and Steve Zahn. The film takes place and was filmed in New Orleans. The main character, Jodi, struggles to fit in at her school because of her height. Her peers constantly mock her height and as a result, she stays out of the spotlight as much as possible. Despite the avid support of her best friends, Fareeda and Dunkleman, and her family, Jodi still grapples with her self-confidence. Until a Swedish exchange student, Stig arrives at her school. In order to gain the attention of Stig, Jodi begins to change her style and personality. This angers the high-school mean girl, Kimmy, causing a series of events to go down that makes Jodi question her self-worth more than ever before.

The film tries to follow a traditional, coming-of-age/John Hughes-esque movie and fails due to undercooked plot and characters. Fareeda is the only mildly interesting character in the movie but never progresses to anything more than the stereotypical best friend. As an African American girl with an extravagant taste in fashion, realistically Fareeda would get bullied far worse and more than Jodi. Instead, the film does not delve into Fareeda’s own personal life, losing the perfect opportunity to display someone who overcomes low self-esteem issues. Dunkleman has been in love with Jodi since the moment he met her, but their relationship lacks development needed to convey the emotions he has for her, making the relationship bland and unsatisfying. The most frustrating characters in the movie are Jodi’s parents. Her mother cares mildly about Jodi’s real problems and devotes all of her attention to Harper, Jodi’s pageant prodigy sister. Her father works hard to try to convince Jodi her height is nothing to be ashamed of, but through the most bizarre methods, purely to add humor to the movie, that only leaves her feeling worse. Harper struggles with her weight, rather than adding to the message of the movie, they are dealt with in a humorous manner and send a bad message to viewers.

The movie is funny at the wrong moments for the wrong reasons. Much of it stems from the lack of chemistry between Jodi and Stig. On the other hand, the chemistry between Jodi and Dunkleman is surprisingly enough for the lack of actual personality. Although many of the performances in the movie are disappointing, Michelle’s performance is a pleasant surprise considering this is her first acting role. Gluck was another actor that stood out for his natural performance as a normal, rather than an overdramatic and shallow, teenager. Michelle and Gluck were able to shine through the cringy dialogue, corny moments, and overused character tropes.

Although the movie has many flaws, some aspects are executed well. A majority of the movie portrays the insecurities high schoolers have and the emotional distress that can come from them. One highlight of the movie is the way they allow Jodi to learn to love her height and understand it is something she should be proud of.

Tall Girl received many negative reactions due to the fact that the movie revolves around the discrimination the main character faces for her height, while in the real world people are oppressed for far more trivial traits with far worse consequences. Despite the focus of the movie, it is definitely not a controversial or offensive movie. The movie focuses on the insecurities high schoolers possess and their lives as a result. While they do not properly convey the reality of bullying, it is meant to be a cheesy rom-com catered towards teenagers. However, there are still certain details in the film that are underdeveloped and the movie feels incomplete and meaningless, to the point you forget the whole movie by the time the credits roll. Tall Girl has good intentions but ultimately lacks the proper execution and creativity to bring the message, that there is more to us than our flaws, to life.