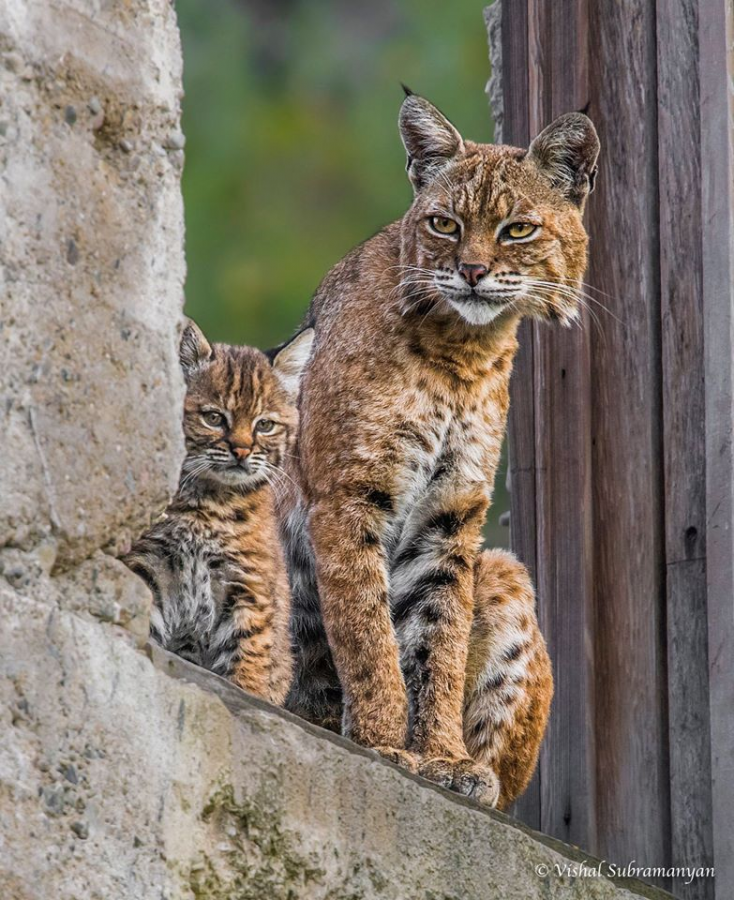 After six hours of patient waiting, Vishal took this photo of a bobcat mother with her kittens in an abandoned building in Livermore.

Target acquired. Click. A lone bobcat stands proud on the undulating slopes of Del Valle, looking for its morning prey. It’s been hours since an animal showed its head in the park’s barren grasslands, but the bobcat’s not alone. Behind bushels of tall grass, Senior Vishal Subramanyan holds his Nikon D500 camera steady, fingers poised above the shutter button. Wildlife photography takes stealth, diligence, and patience, but after four years of photography experience, Vishal has acquired all three. With popular social media pages, including an Instagram account of over five thousand followers, the photographer has made a name for himself in the Fremont community with dynamic captures of bobcats, grizzly bears, and other wildlife.

Despite his popularity now, Vishal’s photography career had humble beginnings. It started on a 2015 trip to Alaska, when he joined his family to see grizzly bears. His dad borrowed a camera from a friend, and having always loved animals and wildlife, Vishal took the chance to take a few photos, an experience that sparked his photography career. As of now, Vishal has taken more than a hundred thousand photos on a variety of different animals, ranging from grizzly bears to owls. His favorite animal to capture is the bobcat, and enjoys capturing dynamic aspects of the feline’s life, from climbing trees to preying on squirrels.

“Bobcats are fun to watch and don’t mind people being near them,” Vishal said. “You can observe them in a way you can’t observe other animals, because other animals are more cautious around humans. I feel in local parks and preserves, they’ve just gotten used to people and realized that they’re not a threat.”

In spite of the bobcat’s seemingly outgoing nature towards humans, Vishal makes sure to stay clear of animals and impact them as little as possible. A naturalist first and wildlife photographer second, he prefers to stay on trails and roads and let animals set the distance themselves. In addition to taking photos, Vishal brings species protection efforts to the forefront, sharing them on his social media pages to raise awareness on important environmental issues, such as fur trapping and trophy hunting.

While taking pictures may sound easy, wildlife photography brings a myriad of challenges with it. Capturing animals takes hours of patience and doesn’t always generate satisfying results. On average, for every eight places Vishal visits for capturing animals, only one location produces a fruitful outcome.

“The main challenge is not finding the animal you’re looking for, which happens most of the time,” said Vishal. “Even if an animal stops by to look around or stop by a tree, you just have a few seconds to capture that image, and it’s easy to miss. Often times, it doesn’t stop and you don’t get that shot even when you find an animal.”

Depending on his luck on a particular day, Vishal sometimes sifts through over 5,000 photos without a good one. The occasional perfect shot goes through a tedious editing process in Adobe Lightroom and Photoshop, where the photographer adjusts lighting, clarity, and other fine details. Some photos have taken him close to seven hours to edit because of difficult background situations, such as bad lighting and blurry images.

To find new wildlife to photograph, Vishal visits local parks on the weekends, such as Del Valle, Coyote Hills, Sycamore Grove, Brushy Peak, and places further north around Point Reyes National Seashore in Marin County. Around once or twice a year, he travels to Alaska, where he photographs grizzly bears and moose.

Ultimately, it’s difficult to pinpoint exactly why Vishal enjoys observing animals–perhaps photography provides him with an outlet to escape life in Fremont’s bustling, urban environment. At the core of his passion for photography is a love for animals.

“We share land with wildlife species and it’s important that we coexist rather than persecute them …I’ve learned from watching animals that they’re all deserving of respect just like every human being is.”