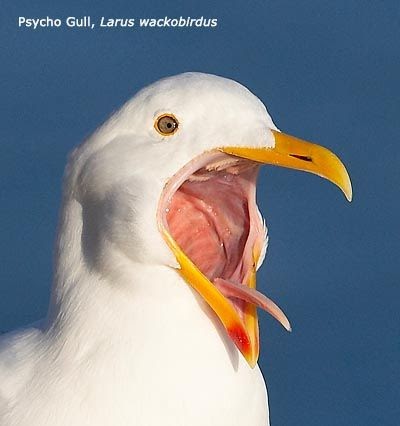 “I came to Irvington High School mainly because I heard about the food students like to drop all around the courtyard and by the cafeteria. However, it turns out I wasn’t the only one who decided to come here, which sucks. I don’t care what she says. I saw the pizza first. It was mine. So I swooped down and tried to snatch it up, but nooo, Karen just had to try and steal it away from me. Doesn’t she know the rules around here? Anything these underdeveloped human beings drop on to the floor belongs to us on a first come, first serve basis, and she was the second seagull to notice this pizza. And who was the first? ME! So yeah, I fought her. We had a full on battle to the bitter, painful end right there in front of the cafeteria as human feet trampled around us (I have no idea where they’re going. I just know that one time a foot stepped on my goldfish and I had to stand in one spot for 20 minutes eating up all the crumbs at the risk of getting run over). Of course, Karen’s a wimp who’s all honk and no bite, so I managed to fight her off fairly easily. Finally, the pizza was mine, right? WRONG? Stupid Carlos snuck up on me while I was defending my honor and took that pizza from right under my beak! He and Josie tore my precious pizza apart and then snapped up all the pieces and now I can’t even have my pizza anymore! My pizza! I have sworn since he took it 5 minutes ago to completely and utterly destroy his pointy little face and mess him up so bad that his own children won’t recognize him any- Ooo, chee-zits!”