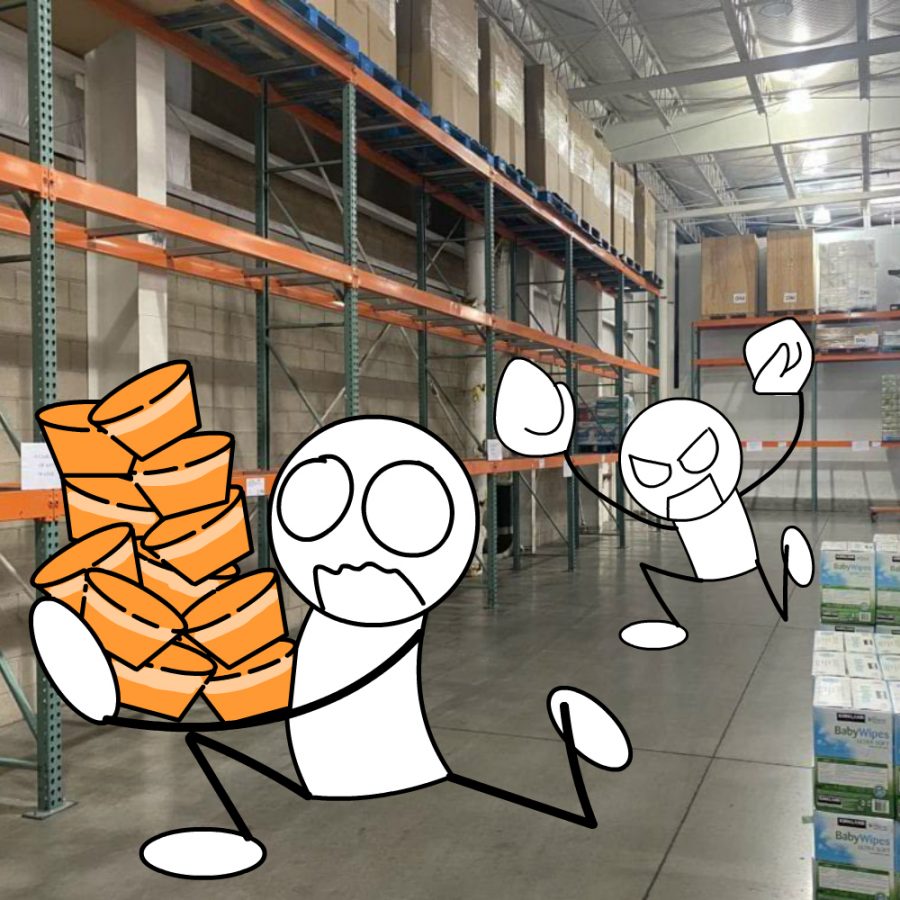 Ramen was worth ten points per box, but scoring was difficult because players had to make it out of the store alive first.

On Mar. 16, following Alameda County’s notice of the shelter-in-place order, the Mission Valley Athletic League (MVAL) announced an ultimate game of Hungry Hippo to be played by all participating high schools as a chance to prove which school was truly the fittest in an apocalypse. To facilitate the match, MVAL created its very own wholesale store (which they spent all the sports donations on) at a secret location. The objective of the match: grab as many supplies as you can and bring them back to your home base to help support your school through the pandemic.

Because the League sprung the game on its member schools ten minutes after the shelter-in-place order, each high school was given only one hour to assemble its top team of players. Coach Gnuhc was selected to lead the Irvington team and MVAL publicly released the directions to the secret location thirty minutes before the match started.

“It was a pain, getting the address so late, but I guess they didn’t want anybody taking the stuff beforehand,” said Coach Gnuhc. “I mean, I saw more parents sitting in the ‘bleachers’ at that game than all the Irvington sports combined. Some even participated, actually, which was interesting to say the least. This is probably the most school spirit I’ve seen in years.”

The school teams started by lining up at the entrance of the store (there was only one door that the athletes had to fight each other to get through). The game was split into rounds and teams could send five players each round until all the supplies had been depleted. Different supplies had different values: cup noodles and canned goods were worth five points each, regular cleaning supplies such as spray bottles and sponges were worth 10 points each, hand sanitizer and toilet paper were each worth 20, and a whopping 50 points was awarded for every face mask. Each person also had one special ability that they could use only once in the entire game.

“We picked random pills from a hat and the pills gave us these enhancements,” said Irvington team member Zelf Karantine (11). “Stuff like Daddy Long-Arms, where you could carry a heck ton of stuff. And One Punch, where you were really strong, you could shove somebody really hard and steal their supplies. I had Yayeet. I had this killer throw and in this one round, I just kept chucking hand sanitizer across the entire room to my teammates.”

About halfway through the game, Irvington was slowly gaining on Mission San Jose, at 680 to 700. Mission had discovered a large stash of toilet paper rolls in the back of the store during the second round, but Irvington made up for the lost points with MVPs like Karantine and One Punch players like Soshal Distanzing (10). In the fourth round, Distanzing stole 250 points worth of cup noodles for his team, with the help of some Irvington parents who had snuck into the store for some supplies.

In the fifth round, however, James Logan High School overtook Irvington when they discovered four face masks. With the supplies rapidly depleting, Irvington Coach Gnuhc posed an elaborate game plan to her players. She had (using various mathematical functions, vectors, and probability formulas) determined the locations of the remaining face masks in the store. She gave each player directions coded in the form of trigonometric equations to deter spying students, as Irvington students are the only ones smart enough to use them. By the end of the sixth round, Irvington had discovered five face masks, putting them well ahead of James Logan and tied with Mission.

“The final round was crazy,” said Irvington player Esen Shal Activies (9). “All the schools were allowed to put their best players on, with their abilities renewed. By golly, it was like all out war in there.”

In the end, Coach Gnuhc’s master plan pulled through and Irvington triumphed with 30 points ahead of Mission’s 1200 points. All supplies (except for those taken by parents, which is hard to track down) will be given to the schools that earned them for further distribution. The Irvington team came back with an honorary banner displaying the proud words: “We Survived.”