Candidates Make Their Cases in Mayor and City Council Forums 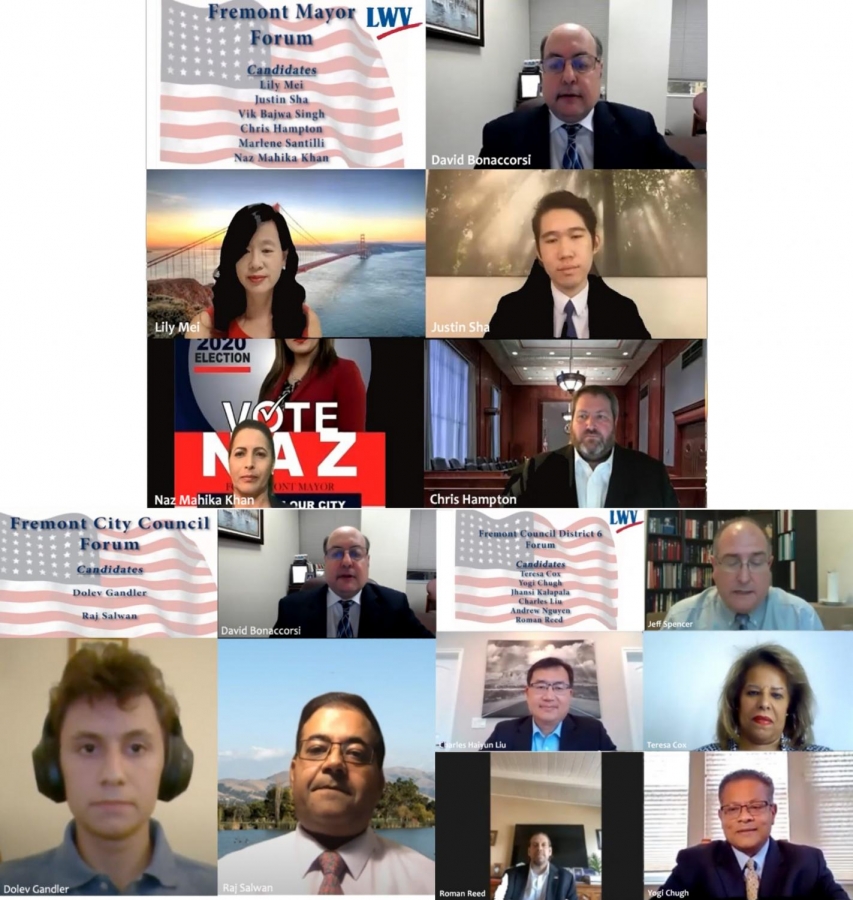 In the coming weeks, the IHS Voice, alongside a coalition of student journalists from across FUSD, will publish detailed candidate profiles for each Fremont candidate running in the 2020 election. Stay tuned!

Update: As part of our collaboration with the Fremont Student Journalist Coalition, the IHS Voice has helped interview and write candidate profiles for local candidates running in the 2020 election. You can find more of our work at www.thefsjc.org.

Throughout mid-September, candidates for the Fremont Mayor and City Council races participated in a number of forums on Zoom hosted by the League of Women Voters to engage with voters on their stances in city policy.

Candidates were asked a series of questions submitted beforehand by the community and had two minutes to answer each, with housing development, police training, and city transparency quickly becoming the core issues discussed in the forums.

Housing and homelessness quickly became the most pressing issue of the forum nights. While the City Council candidates were eager to champion various forms of affordable housing to increase the housing supply, candidates on the Mayor forum pointed out the necessary equal development in parks, recreational facilities, schools, transit, and business attraction to complement an increase in housing. Mei and Khan advocated building more units for Fremont’s increasing senior population, while Sha cited environmentally-conscious, life-cycle housing and Hampton cautioned to wait until after the pandemic to accurately assess housing distribution. District 5 candidates Salwan and Gandler, on the other hand, emphasized the need to build denser, taller structures near transit as the only way to solve the housing crisis in Fremont.

In the aftermath of police shootings and brutality around the country, the overwhelming consensus in the Mayor and City Council forums was that public safety in Fremont was their primary concern. No candidates, however, committed to any defunding of the police, with some such as Liu and Hampton even advocating for more funding and officers to improve the police department. Mayor candidates Sha and Hampton warned against putting too much pressure on the police force, and most City Council candidates favored reallocating the police budget to incorporate expanded training and resources for social workers.

Notably, discussion of police officers in schools was limited throughout the nights, but Khan and Gandler underscored the distrust of SROs and their assault weapons in schools and highlighted the need to rethink their roles there, too.

Finally, transparency, along with inefficient communication, were hot topics that resurfaced throughout the forums. Most issues were related to police funding and Fremont’s approach to COVID-19. Mei faced scrutiny by other mayor candidates on her publicity of the police budget and slow communication channels that affected public input.

In District 5, incumbent Councilmember Salwan addressed the need to build a better relationship with the public by increasing town hall meetings, while Gandler stressed the need for increased youth participation in local affairs, advocating for more high school conversations and visits to increase engagement.

The League of Women Voters will continue to host candidate forums in the upcoming weeks for local elections in the Tri-City Area, including forums covering the FUSD School Board, the Ohlone College Board of Trustees, and the Alameda County Water District. For more information about these upcoming forums, click here. If you would like to watch a replay of the forums mentioned in this article, click here.

Stay tuned for our coverage of the Fremont 2020 Election with the Fremont Student Journalist Coalition!