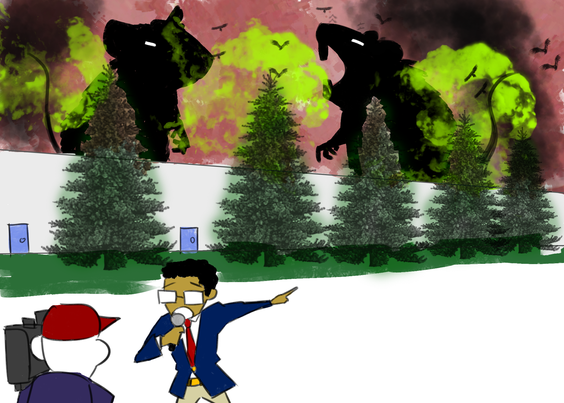 The rodents gained miraculous strength and cognitive abilities beyond our comprehension, turning the campus into a "Jurassic Park" but for mice.

Over the past weekend, Irvington’s campus landscape has drastically changed. What once was a place where students came to learn and prepare for their future now looks like a scene out of Jurassic Park. With extreme fungal growth and rodents the size of three school busses, the campus is now host to new, previously undiscovered species. As you probably guessed, AP Bio students have already jumped to analyzing the new species in hopes for an extra credit opportunity.

Rats and other rodents were never strangers to Irvington’s campus. “I mean I’ve always seen this really fat mouse eating out of the cafeteria kitchen, but I could never figure out where they came from” a student said. “I just assumed that it lived in a corner or something”.

Other members of Irvington’s custodial staff seemed to share similar views. “They would always come out of nowhere, like they just popped out of the ground like rabid gophers” janitor Jerome Johnson said. “But since there were so many of them, I just brushed it off as a normal occurrence.” Johnson was surprisingly close to the truth.

In reality, the rodents were living underground in a network of tunnels more complicated than the recent Calculus BC Chapter 7 test. These tunnels were expected to be relics of the past when Irvington students would try and dig their way out of the prison-like campus. In this decade-old labyrinth, the rodents took refuge. The only problem was that the nest that the rodents made was right underneath the boys locker room. As the toxic sludge went down the drains, it dripped into the rodents’ home, slowly modifying their genes in a Teenage Mutant Ninja Turtles – esque manner to create “super-rodents”. This of course raises the question of why the rodents decided to live under the toxic environment in the first place.

“Well the two options were to either stay on the surface and be next to these acne-covered filthy teenagers, or live amongst toxic sludge,” said a 5 foot 6 inch tall rat with three arms. “So, we naturally chose the lesser of the two evils and decided to live with toxins underground. The reason we only came out now is because campus is abandoned and we don’t have to deal with the high-schoolers again.” Currently, in the midst of the fungal growth that has taken over the campus, multiple mutated mice make their home. From mice with three legs, to ones that are fluent in 5 languages and tutoring AP French Students in exchange for cheese, there is no lack of variety in the mutations. Yet surprisingly, people only began noticing this when the mice started to show themselves to the public.

“Well Irvington always looks like a fungal wasteland even when school is in session, so it didn’t look too much different” a passerby said. “It was probably the mouse with a jetpack on its back that tipped me off that something was different.”

The FUSD school board is currently set to vote on deciding to vote on taking action about this issue in the next three months. This was met with opposition by FUDTA who criticized the board members for rushing to a vote without going through proper channels. For now, the rodents seem as though they will remain on campus.