Irvington Places 7th in We The People Nationals 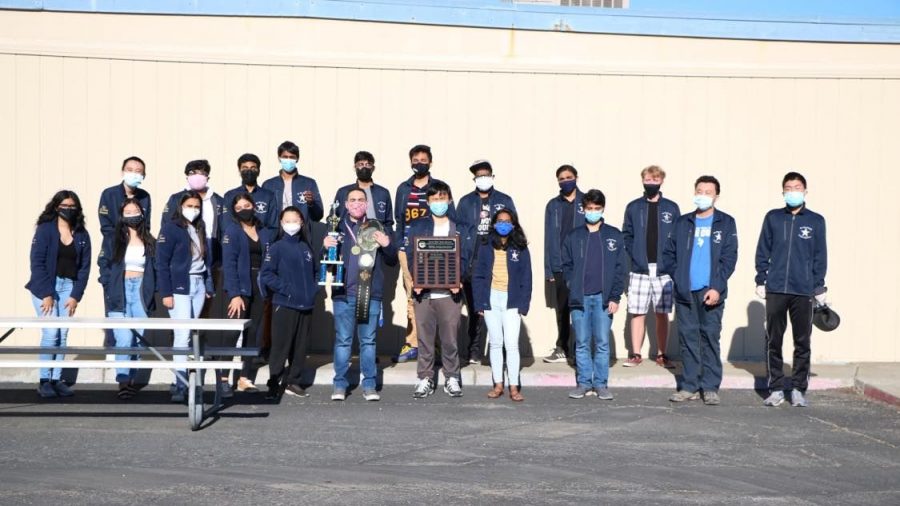 Irvington’s We The People team, including coach Mr. Martinez, poses with their trophies.

Irvington’s We The People team recently competed in the National Finals from Apr. 24th to 26th. It was a historic and proud moment for the team as it placed 7th overall, among a total of 48 of the best programs in the nation.

Irvington’s ‘We The People’ is an academic and competitive program for seniors. Offering a rigorous curriculum of history, government, and law, the course teaches students how to craft testimonies, four-minute prepared speeches, to present at various competitions. The class itself is divided into six different groups called ‘units,’ each of which focus on different aspects of Constitutional history and law. At the competitions, the units present their testimony,which involves topics like the framing of the Constitution, the Bill of Rights, and how historical documents and court cases relate to 21st century issues. Then for eight minutes, the units answer judges’ questions about their testimonies.

This year, the Irvington team put on a remarkable performance as they were victorious at all levels upto the State competition; in fact, this year’s State-level victory was one of only two in all of the program’s history at Irvington. Under the instruction of coach and teacher Mr. Martinez, the team participated in all the competitions despite the COVID-19 pandemic. Although there was a lack of in-person interaction, distance learning did offer a practical advantage of meeting up online rather than commuting to school, which still preserved the social interaction.

“With We The People, you really have to interact and practice with people online,” said Orion Fang (12), who is in Unit 2. “So I have that connection to the real world…It was just communication skills, and [it was] more teamwork-based.”

After the State-level victory, the team went into an intense 11-week preparation period. The team continued their successful strategy for preparation; they did several dress rehearsals and also had a scrimmage practice session with the other California team, Foothill High School. Finally during the weekend of Apr. 24th and 25th, the team first competed in the group stage. The team’s two-day performance qualified them for the final third day, which only involved 12 out of the initial 48 schools nationwide. Even under the intense pressure from the judges, the team gave a remarkable performance and placed 7th overall. Although many in the team did hope for a top 5 spot in the Nationals, 7th place was still an exceptional result.

“All the students should really be celebrated. It’s a huge accomplishment,” concluded Mr. Martinez, the team coach and former We The People alumnus. “They can say that they were state champions, and not a lot of people get to say that, so it’s pretty cool.”

The We The People program has definitely impacted the seniors in several ways, especially after the historic qualification in the National Finals. Different team members learned various skills and lessons from the program.

“I think overall, this has prepared me to become a better citizen, a more educated voter in the future, and also a more civically engaged person,” shared Sumukh Suresh (12), who is in Unit 1. “So if there’s ever any legislation in California, like propositions and all that, I’ll be more informed on how I should vote, whether or not it falls in line with our constitutional mandate.”

For some seniors, We The People served as an opportunity to learn public-speaking and communication skills, while others gained historical and civic knowledge about the U.S. Whichever the case, the Irvington We The People team has been able to strongly hone their talents this year on top of making its impactful mark in the program’s history.