Attack on Titan: The Final Season Raises Tensions for Viewers 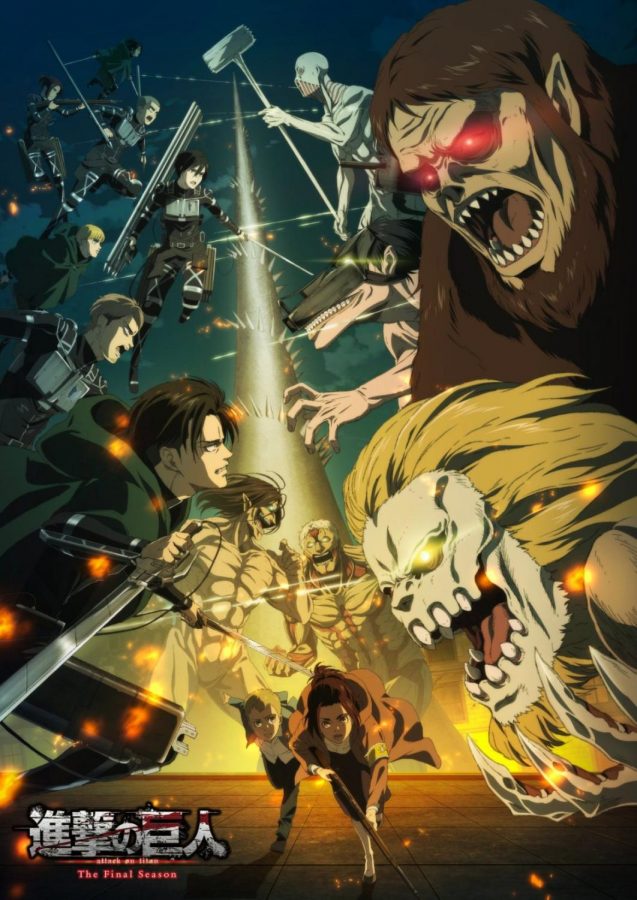 On December 7, 2020, Attack on Titan: The Final Season, or Shingeki no Kyojin in Japanese, aired on services worldwide. Met with both criticism and praise, the final season aims to bring to a close a story that has been ongoing for 14 years. The first part of the season and the manga of the same name, which released its final chapter on March 8th of this year, has left fans with high expectations for the second part of the series, set for release in winter of 2021.

The anime centers around the ever-expanding plot of survival against a world plagued by titans, man-eating monsters with initially unknown origins. The main characters, individuals within the survey corps, killed these creatures within their walled civilization, where they believed the last of humanity lived, while simultaneously trying to learn about where the monstrous creatures originated from in seasons one through three. The storyline complicates as the survey corps arrive at the truth of their existence at the end of season three, and learn that there is humanity outside the walls. Consequently, season four unfolds the story of a war between the walled civilization, Paradis, and the countries on the other side of their oceanic barrier, namely Marley.

The plot’s strength lies within the complex morality of each character, leaving viewers with no possibility of picking a good or bad side. The main trio that the viewers have watched grow together from season one to three, Armin, Mikasa, and Eren, are now split in season four due to their different ideologies and outlooks on what is best for the world. This split results in higher tensions than ever before in the story, as viewers no longer truly know who to completely root for, and are left just hoping for the best, unknown of which character will provide that. Eren, the main protagonist of the anime, is the most morally complex of the three. His split from the trio was in pursuit of violent plans that tend to spark outrage from his previous peers. While in the past seasons, viewers would’ve watched the story from the narrated lenses of Eren so that they could understand his thoughts before each of his actions, they no longer receive that through all the episodes. This creates a sense of mystery, which prompts fans to keep on watching in order to figure out why Eren commits the drastic actions he does.

The story has clear roots and intentions in presenting the effects of systematic and internalized racism in an analogical way. Therefore, when the first episode of the series starts off with completely new characters, two children living in a country that villainized our main characters, fans are forced to sympathize slightly with the victims of their Marleyan society, as they are children soldiers who are forced to serve their country because of the ingrained racism they are taught.

The most noticeable difference between the previous seasons and four lies within the animation. While previously produced by WIT Studio, Attack on Titan switched production to MAPPA Studios, known for other popular anime like Jujutsu Kaisen, Banana Fish, Kakeguri, and Yuri on Ice, among others. Accordingly, the character design and style had small changes in comparison to the ones in WIT studio, with the faces having less angular features in a switch to match the style presented in the manga by Hajime Isayama. Additionally, the use of CGI is increased for season four, in order to animate a larger amount of titans in the same frame. At times, it can feel that the animation of the titans are less intense and slower to what was presented in season one to three, but the fight scenes continue to impress. Combined with the use of rotoscoping to enhance otherwise bland scenes, the animation still stands strong as the series previously presented.

Attack on Titan, an anime that first premiered 8 years ago, manages to capture viewers who have stuck around for nearly a decade with their eye-catching animation and stellar cast of characters. The first sixteen episodes of the season and final chapter of the manga are sure to leave fans excited for the next part of the anime.