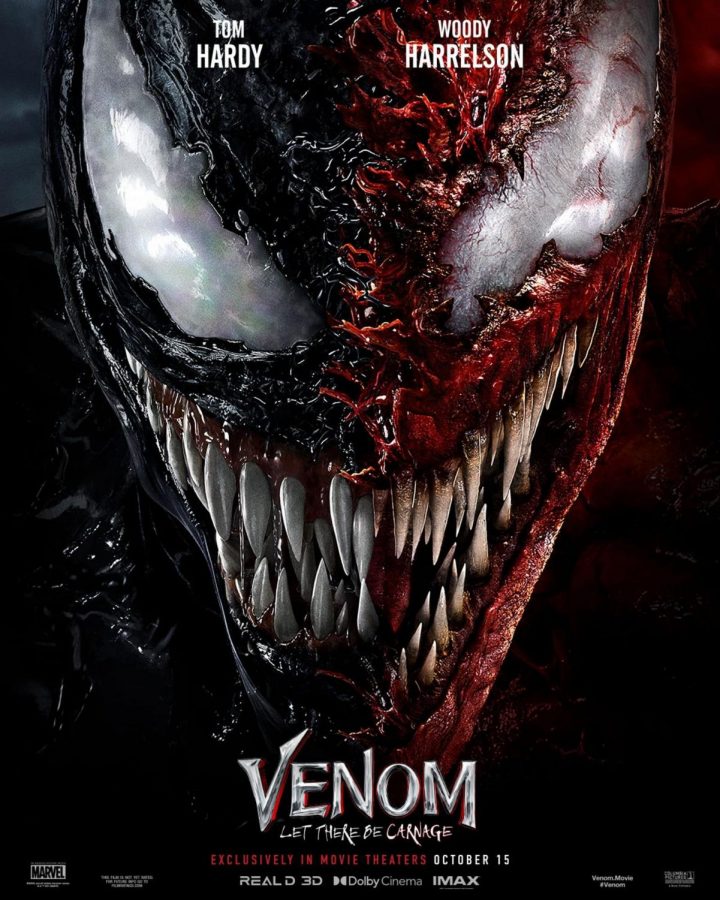 Released on October 1, 2021, Venom: Let There Be Carnage, is the sequel to Marvel’s Venom, and it throws its audience once again into the darker part of the Marvel Cinematic Universe. Directed by Andry Serkis, the movie brings back our main characters, Eddie Brock (Tom Hardy) and his symbiote friend Venom, who finds themselves stuck in another thrilling life-or-death situation against serial killer Cletus Kasady (Woody Harrelson) and Carnage, a symbiote similar to that of Venom.

Starting off, the movie’s cinematography had an evident theme presented in its prologue: gothic. Unlike the first Venom movie, Let There Be Carnage was written with its main filming locations in the suburbs as compared to the more technologically advanced setting in the first movie. Focused on abandoned cathedrals, asylums, and an old psychiatric facility, the movie inflicted a sense of apprehension with its ghastly backgrounds. The additional use of dim rather than hard lighting managed to draw out the most of the said theme, eliciting the sinister vibe that laces the film.

Not to mention, the plot of Let There Be Carnage is a perfect blend of humor, literal attachment issues, and, of course, violence. This movie hones in on Eddie and Venom’s relationship, delighting its audience with comedic moments when they argue and squabble like two children about following Eddie’s rules. The action scenes added the cherry on top, balancing out the dialogue and combat. Woody Harrelson provided a praiseworthy performance, as he was able to deliver an immaculate imitation of an unstable killer with his off-the-rocker personality. His off-kilter demeanor and unnaturally steady voice add to the flavor of a character who seethes with resentment as an evident antagonist of the movie.

Though there are many exceptional parts to this movie, the narrative mostly fell flat toward the end. Anne Weying (Michelle Williams) who had been the intended love interest for Eddie Brock in the first movie, was wrapped up in the dispute at the climax, but then never to be seen again during the actual action scenes. Her potential is basically trashed and used as fodder for the real conflict of the movie. To add on, the resolution of the plot was rather anticlimactic and felt unsatisfying. It did not manage to live up to the build-up of all the tension presented before—the movie itself seemed to give up before the storyline even ended. Venom: Let There Be Carnage is a witty, quick movie that continues to draw out the best of one of Marvel’s morally grey characters despite having some kinks here and there. If you are looking for a movie with intense action and jokes all rolled into a riveting storyline, this is a definite must-watch film.