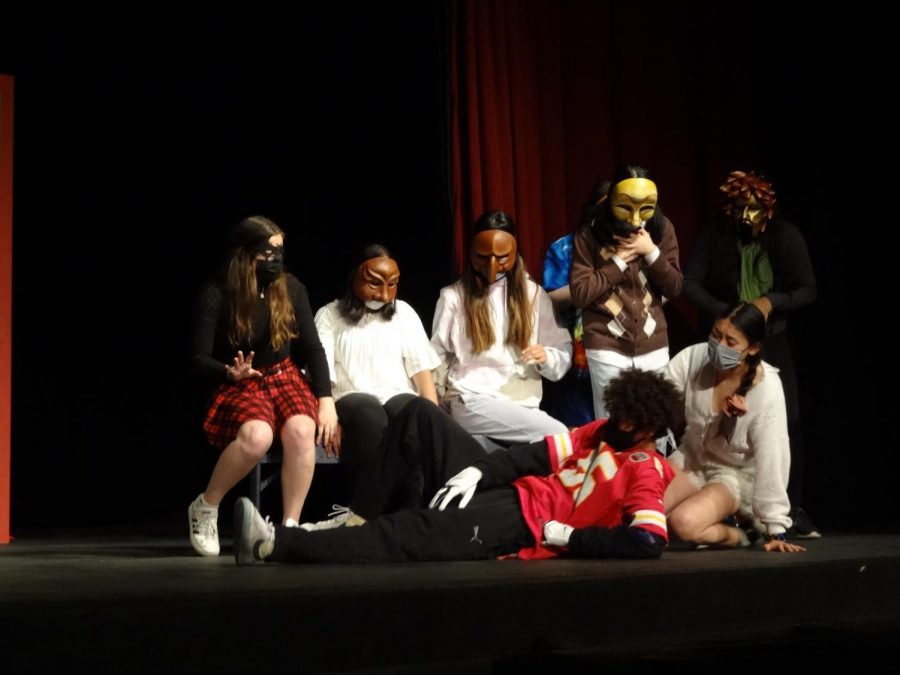 During the “Doctor’s Office” Commedia scene, the Young Male Lover, a football player played by Jacob Hearns (12), trips and hurts his leg. His cheerleader girlfriend, the Young Female Lover played by Avril Brown (10), and several other Commedia characters gather around to check on him.

On Friday, October 8 at 7 p.m., the Irvington Conservatory Theater officially presented its first live show in Valhalla in almost two years: the Mime Commedia show. Typically held annually, this is a two-part show featuring the work from the first unit of Mr. Ballin’s Drama 1 and Drama 2 classes. Drama 1 performed pantomimes while Drama 2 improvised Commedia dell’arte scenes. About 150 people were in attendance; aside from drama students, who were required to come, many outside guests came as well.

After a short introduction from Mr. Ballin, the pantomimes began. In “A Day at the Store,” actors mimed a sequence of events happening in a store, such as an object breaking and the pieces being swept up. “Emergency Room” was an especially impressive scene. As nurses performed CPR on an unconscious patient, the actor’s chest moved up and down with their motions. “Two Drunk Idiots” involved a bar fight between two drunk customers, played by Kyle Peng (11) and Nicolas Aguilar (11). It required coordination between the group members, as well as a good knowledge of pantomime.

“A lot of stuff that we did before and after the fight scene had to be carefully done,” Peng explained. “Every time […] we start an action, we have to stop, make sure the audience sees what we’re about to do. And then after the action, we also stop.” This is essential for pantomime, which is portrayed through actions rather than words.

The final scene was “The Magic Show,” or  “The Bad Magic Show,” as Vivian Bao (9), who played one of the judges, put it. A magician, played by Christin Mendoza (9), demonstrated several tricks, with the last one going terribly awry: the magician locked herself in a tank of water but was unable to escape.

Each group had soundtracks and audio effects playing in the background, which added to the scene. “Emergency Room” had sirens, while water sounds played during the last trick in “The Magic Show.”

“We changed the soundtrack a bit last minute,” Mendoza said. “That’s where the [improvisation] part came in. I had to really lengthen some parts. So […] I was doing a lot of talking, miming talking.”

On the whole, the pantomime scenes were a little difficult to understand at first. However, once the actors set the stage, it was easy to get lost in the story.

“The Drama 1 kids exceeded my expectations [in] the quality of their performances,” Mr. Ballin said. “Knowing that they had a live public performance, I think they perfected their scenes.”

A short intermission was held for Drama 2 to prepare. Then, with the press of a button, the white projector in front of the stage lifted to reveal the Commedia set: a large, green structure with a door and two windows.

Commedia is a type of old Italian improvisational comedy where actors wear masks. It is made up of stock characters with distinct characteristics, many of which can be found in popular media. Drama 2 students read about their characters to understand them better.

Avril Brown (10), who plays the vain Young Female Lover, said, “A tiny bit that actually really touched me and helped me understand the character [was that] young lovers represent the potential for the good of humanity. […] They just need time to grow.”

In “A Marriage Story,” the Young Female Lover convinced Columbina, her serving maid, to petition the duke Magnifico to let her marry against her father’s wishes. “The Doctor’s Office” came next. The Young Male Lover, a typical high school jock, broke his leg. Dottore, an incompetent doctor, and his assistant, the dense Zanni, dealt with the broken leg by administering unhelpful serums.

“Karen vs. Criminals” was a modern take on Pantalona, a grumpy old lady. In the scene, Pantalona complained about the younger generations’ disrespect while the mischievous Brighella searched her house for valuables to steal. Arlecchino, an acrobatic but unintelligent character, distracted Pantalona. “Dumb, Dumber, and Dumbest” focused on Pulcinella, Pedrolino, and Capitano and their adventures in getting gold from a dangerous mountain.

“I […] thought that a lot of the Drama 2 [kids] did a really nice job being heard through two masks in a fairly full theater, which I didn’t anticipate,” Mr. Ballin remarked. “And […] a lot of them really nailed their characters.”

While the Commedia and pantomimes were funny and entertaining, it would have been nice to get a brief introduction of each actor and character before the scene. Several groups felt that the main issues were with syncing soundtracks to actions. From an audience perspective, it was less obvious, but there were certain moments where pauses stretched on for a bit.

Overall, the show was lively and enjoyable. Hearing the audience react to live actors was a tremendous improvement from watching virtual shows alone.

“It’s hard to get a live show up this early in the year, and especially hard to market it and get an audience,” Mr. Ballin commented. “And in the middle of it, I’m like, ‘Why did I do this?’ But afterwards, I was very pleased with the result.”

For updates, check out www.ihsdrama.com/.

Conflict of interest: I must note that I am not an entirely unbiased source, as I share a class with Drama 2. However, I did truly enjoy the show, and I was pleasantly surprised by all the performances. If anyone would like to challenge my credibility, I invite them to attend future drama productions to see for themselves.