The *Official* Best Media of the Year 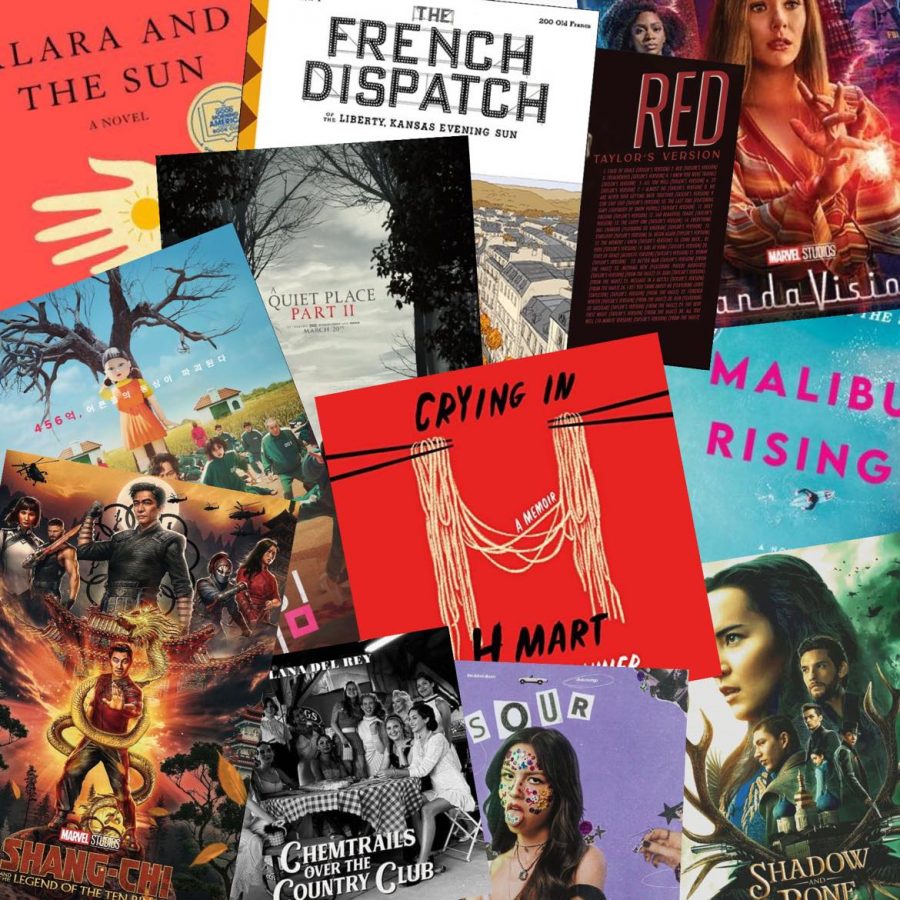 Trying to catch up on the new releases you missed while you were binging The Office for the eleventh time? The IHS Voice has a comprehensive list of everything you need to read, watch, and listen to to seem culturally informed.

A Quiet Place 2, John Krasinski: Though this film premiered in 2020, it made its theatrical debut in May 2021. For those who enjoyed the original A Quiet Place, this story offers more closure on the characters than the first film, though watching it is just as anxiety-inducing and nail-biting. Just like the first movie, A Quiet Place 2 is enjoyable for both fans and critics of horror alike; it doesn’t rely on jumpscares or gore to keep people watching, rather, it depends on the fast-paced storytelling.Shang-Chi and the Legend of the Ten Rings, Destin Daniel Cretton: Shang-Chi accomplishes what most Marvels aim to do but few succeed in; just like movies such as Thor: Ragnarok and Black Panther, the film stands out from other Marvel films released this year. While the upsetting lack of promotion for the film should have hindered its success, the film proved to be a hit. The massive box office debut and sustained popularity speak for themselves.The French Dispatch, Wes Anderson: While newcomers to Wes Anderson films may be assaulted by all the visual stimuli, The French Dispatch is a reminder of everything that makes the director so celebrated.

Chemtrails over the Country Club, Lana Del Rey: While Norman F****** Rockwell was Lana Del Rey’s ode to her highly aestheticized Hollywood lifestyle, Chemtrails Over The Country Club marks the beginning of Del Rey’s more personal, stripped-back music. Gone is the orchestral production of Born to Die, the cinematics of Ultraviolence. Instead, it almost seems as if Lana is reciting her own poetry over a minimal backing.Red (Taylor’s Version), Taylor Swift: Is it possible to win Best Actress at the Grammys? Taylor Swift’s rerecording of her only breakup album Red, perfectly recounts her heartbreak, her emotions throughout the album as raw as they were on the original record, nine years ago. Features from Phoebe Bridgers and Ed Sheeran and unheard-of original songs make this record seem simultaneously new and old—loving it is as easy as knowing all the words to your old favorite song.   Sour, Olivia Rodrigo: What makes this album so perfect is how unabashed singer Olivia Rodrigo is about her own immaturity. While other breakout singers may wish to present themselves as adult-adjacent, Rodrigo makes no attempt to do so. Rather, she fully embraces her teenage heartbreak and the associated emotions. The result is an album that is, contrary to its title, bursting with flavor.

Shadow and Bone: When I first heard that Shadow and Bone was being adapted for the screen, I hadn’t read the books; still, I was doubtful that it would be possible to capture the magic of the Grishaverse on camera. Part of me was afraid of another repeat of what happened with the Percy Jackson movies. However, watching the show, I quickly realized that it was no such thing. The characters seem just as real as they did on paper- perhaps even more so due to the performance of the breakout characters. The story combines two novels from the original source material- Shadow and Bone and Six of Crows. It doesn’t, however, feel rushed, instead taking time with the development of each character and leaving fans of the books and first-timers to the Grishaverse wanting more.  WandaVision: WandaVision marked the Marvel Cinematic Universe’s first venture into telling episodic stories. The first of three TV shows, WandaVision tells the story of ex-Avenger Wanda Maximoff’s mental instability after the loss of most of the members of her team. The attention to detail and creativity was such a refreshing break from Marvel’s usual action sequences that I was almost dreading the release of The Falcon and the Winter Soldier and Loki. Squid Game: It seems that the title “Most watched Netflix show” has lost all meaning; every show is the most-watched until the next debut. In fact, The Queen’s Gambit, released only a year prior to Squid Game, previously held the title. Still, the seemingly overnight success of the show is impressive. While it is still unclear whether the show will stand the test of time, its binge-worthiness and popularity is enough to secure its place on the list for now.

Klara and the Sun, Kazuo Ishiguro: This novel is told through the point of view of Klara, an “Artificial Friend”. Though she technically is a robot, it is difficult to actually view Klara as one, which is owed to author Kazuo Ishiguro’s ability to write complex characters. As she is “friends” with a girl with a terminal illness, Klara asks the sun, which powers her, to help sustain her friend as well. Klara’s interactions with people are a look at existential questions that most humans have through the lens of science fiction.  Crying in H-Mart, Michelle Zauner: Michelle Zauner, singer and guitarist of the band Japanese Breakfast, makes her literary debut with Crying in H-Mart. Her essay with the same title that appeared in the New Yorker in 2018 is the prologue, and introduces the novel’s themes of grief, loss, and recovery, as both it and the novel narrate the time preceding and the months after her mother’s death.Malibu Rising, Taylor Jenkins Reed: After two of her books—Daisy Jones and the Six and The Seven Husbands of Evelyn Hugo—essentially went viral, the latest work by Taylor Jenkins Reed was highly anticipated, both on BookTok and beyond. Malibu Rising absolutely lives up to every expectation that fans of Reed held—the only reason it’s not higher on this list is because I’m tired of reading about Mick Riva. I hate him.