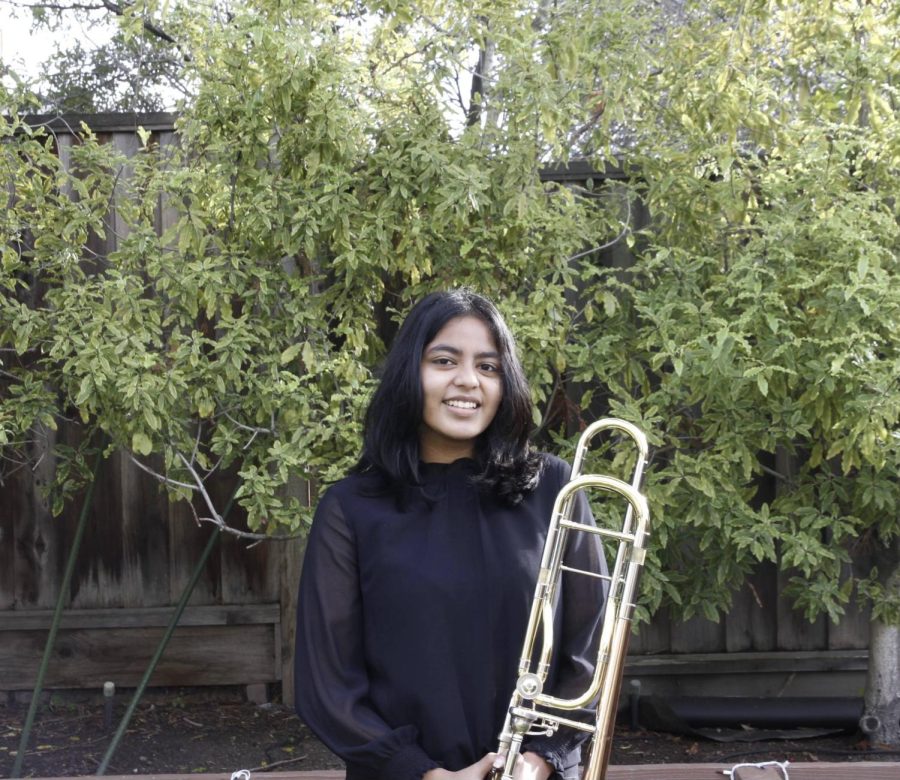 I started playing the trombone in the seventh grade, when I started in Horner’s beginning band. Mr. Lorigan, who’s really amazing, definitely encouraged me throughout middle school to keep at it. I definitely don’t think I would have the level of dedication that I do today, had I not had him as my director. Our beginning band was desperately in need of low brass players, and I looked at the picture of the trombone, and I was like, it looks simple enough. I didn’t think I would be playing a brass instrument. Definitely not like the loudest one there is. The trombone isn’t used often in orchestra, but when it is used, those moments are really, really powerful.

In freshman year, Wind Ensemble II was my first time playing in a high school band. And I really liked how I got to meet people from different grades, and got introduced to so many different kinds of band kids. Marching band was also just a completely novel experience for me. I was so surprised by the insane amount of section spirit. Playing while marching took me a while to get used to, but I’m still just so grateful for the amazing community I’ve gotten to be in. Marching band is such a huge time commitment because we go to band reviews nearly every week of the season, and these are whole-day affairs. You just get to know everyone so well. I really value the people and the relationships I’ve made in band. It’s truly a collaborative art.

I’m passionate about music because of its capability to connect with people. The experience of being in a group and being able to create something that so strongly affects someone’s emotions, and presents such a wide variety of thoughts and ideas — it’s unmatched. I love creating music and being in groups that create great music, and I’m super grateful to have experienced that part of Irvington.

Auditioning in general can be really intimidating. For All-State, it’s more about constantwork, so you have to start on the audition material early if you want a chance of making it. In my experience, it’s mostly just been finding the motivation to consistently practice almost every day and work on the same material over and over, even if it gets tiring.

I’ve performed in All Northern and district honor bands before, but this is my first time in All-State. I’ll get to meet kids from all around the state, instead of just Northern California, which is going to be exciting. It’s a four-day-long conference, and you’re just working on a couple of pieces intensively over the course of a few days. It culminates in a performance on the last day of the conference, so I think it’s going to be a cool experience, though. In the past, I’ve really enjoyed just getting to meet other passionate players.

Practice really depends on the time of the year. If it’s marching season, then I’ll be having three marching practices a week, so I won’t usually practice at home those days. But marching season also kind of coincides with All-State audition season, so during those weeks, I’m probably dedicating somewhere around five to six hours. I’ll try to get about an hour or an hour and a half of cumulative, consistent practice every day. When audition season is over, I’ll get started on other pieces that I might want to play just for enjoyment, and All-State music comes out around April, so I’ll look at music for that then.

In terms of obstacles, there definitely are more technical issues that you just have to work at. There’s just some stuff that seems really, really difficult when I first look at it, but then I’ll find that over the course of a couple of weeks or even months, I am getting better at it. Even if it’s still not where I want it to be. I feel like something that probably does apply to most musicians is also the more perfectionist approach. I’ll need to get every aspect of a piece right, from my articulation to my pitch to my rhythm, and my own musical interpretation needs to be right. For auditions that are recorded instead of live, it’s kind of more nerve wracking because you keep listening back to yourself. And you keep thinking, can I get another take of this? And could I possibly get it better? Over the years, I’ve had to learn to be satisfied with what I think is my personal best and kind of realizing my own limitations at that point in time.

I play classical trombone, so I do listen to a lot of brass-heavy pieces and classical music. I especially love Mahler’s Fifth. This year I played Prokofiev’s ballet Romeo and Juliet for orchestra, and that was something I really enjoyed. We also played Gershwin’s American in Paris; that was a really fun piece as well.

Some of my favorite memories are the award ceremonies for marching band, especially when we won sweepstakes twice this season. Getting to hang out with my section outside of class and getting to know everyone this year — I got to be more proactive as a section leader, especially coming back to band in person.