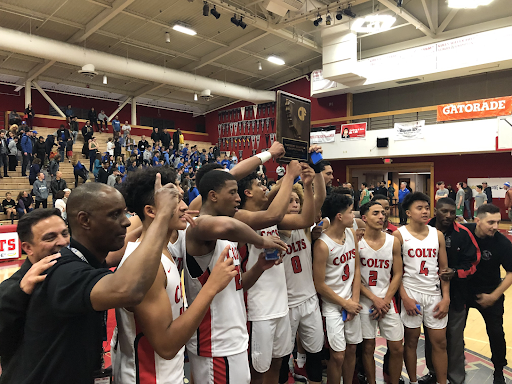 On Friday April 1, 2022 a basketball game was held at James Logan High school, where the team won, with the final score being 75 to 12. The team was expected to win this game as they consistently do, and it was very refreshing to see a winning team play this year.

The players made very impressive baskets throughout the game such as the team captain Stew Pid (12) made 5 3-pointer shots, and dominated the game throughout. Although this did seem to upset the other team captain, who airballed 3 layups in a row. It was very embarrassing to watch.

With the game being the first after school was opened in person again, it was quite evident which team was keeping up regular practices and games during the virtual year. The same team also had a lot of anti-maskers…. but, I mean, it might be less embarrassing to take COVID-19 lightly than score 12 points in the entirety of 2 hours.

Id Ye Ut (11), another team captain, was proud of the team’s performance and win but was a little embarrassed for the other team as they were losing so poorly.

“At one point, I considered not defending the players so they could make a few points,” explained Ut. “But then I decided against it because it was lowkey funny to watch them struggle.”

Dum Bo (10), who is a first year varsity player, was dumbfounded by how bad the other team was losing.

“I think the 5’1 freshmen that are on our junior varsity team are better players,” admitted Bo. “Our varsity team has agreed to let the JV team play in games against this team from now on, so at least they can lose by a smaller margin.”

By the third quarter of the game, the team did collectively agree to take a more defensive approach to the game so they wouldn’t continue scoring more points and further humiliating the other team. However, this somewhat backfired as the other team was unable to score a single point during the quarter.

Covering the James Logan game was, dare I say, life-changing as I never thought I would have the opportunity to cheer for a team during a high-school game. James Logan High school’s basketball team has earned my respect and from now on, the Voice will only cover games played by their team. We will no longer be covering Vikings sports as they are extremely underwhelming and a pain to write in a positive light. Our sports editor is often forced to extensively edit articles about Irvington’s team so the original versions, which are truthful, don’t anger teams. But that’s a story for another day. For now, let’s all bask in the glory of a winning sports team…James Logan High School.