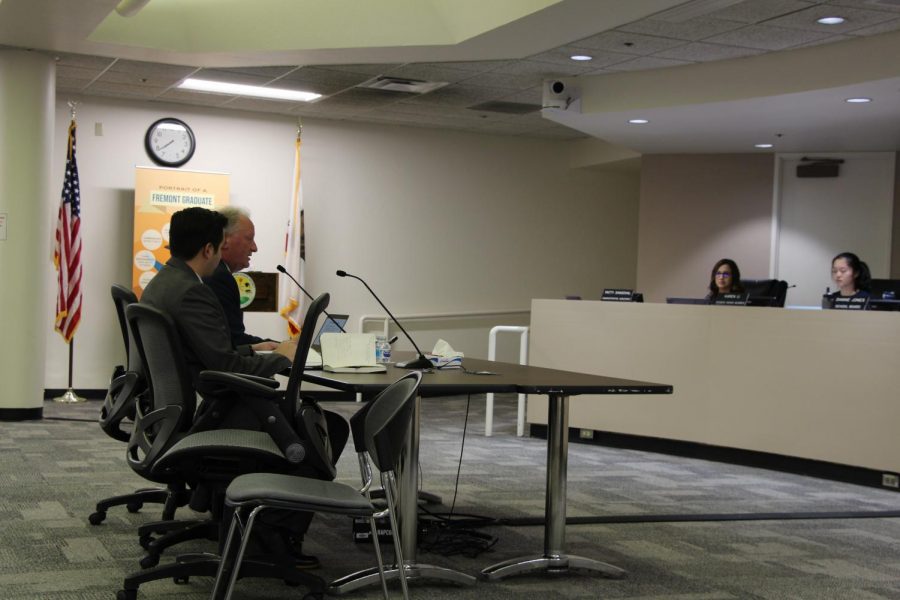 On Wednesday, Oct. 30 at 7 pm, the Fremont Unified School District (FUSD) held a public hearing at the District Office Board Room regarding drawing new “by-trustee”  district voting lines after a lawsuit accused the district’s previous use of “at-large” voting of not complying to the California Voting Rights Act (CVRA).

FUSD’s lack of compliance with the CVRA prompted a lawsuit from Shenkman & Hughes, a law firm that previously sued other cities for not complying with the CVRA. According to Peter Fagen, an attorney with Fagen Friedman & Fulfrost LLP, the CVRA prohibits the use of “at-large” elections when they make it harder for members of protected groups to elect the trustee of their choice.  The “at-large” election has never fit these criteria set by the California Voting Rights Act. However, a “by-trustee” voting system would comply with the CVRA because it splits the district into trustee areas which each elect their own trustee. To be elected, the trustee needs to live in their area, and only members of that area can vote for them.

Since many current board members live in the same proposed trustee area of Fremont, only one of them will be able to serve on the next election in order to comply with the CVRA. Trustee areas with no current board members living there will have fresh candidates running for election. This representation of area-specific interest is lost in an at-large election, where the elected representative would represent the general consensus.

The district emphasized that these voting areas are separate from attendance areas; thus, the schools that students attend will not change, but the method in which trustees are voted into the board will.

Keeping these requirements in mind, demographer Jacob Gomez presented the board with four draft maps that fulfill the requirements put forth by the CVRA. Community input was taken into account before the creation of each map.

These maps will be redrawn after every census, similar to the congressional representative voting areas. Therefore, in 2021, when the data from the 2020 census is published, these lines will be redrawn again. Because of this, the trustee area voting lines are able to account for population growth in certain areas.

In the first draft map prepared by Gomez, high schools were lined up with the trustee voting area.

“There are a few areas, [that] didn’t meet [the requirements] quite exactly when I brought in the data,” said Gomez, “so there is a slight adjustment within plan one to get it to fit, but the majority, I believe, encompasses that original community plan.”

Some people are concerned that individual schools’ interests will not be represented by an elected school board member if by-trustee voting lines do not line up with the school attendance areas. However, this is impossible for any high school. And a few elementary schools.

“It simply makes no sense that my neighbors and friends [near] my old house… will be voting and represented by a totally different trustee from mine if we adopt map 3,” said Chadbourne Elementary School parent Helen Long. “Furthermore, map 1 and 2 have significantly less elementary school[s] divided, so keeping the vast majority of elementary communities intact is totally possible.”

On the other hand, other community members emphasized that the Fremont Unified School District was made to be unified and should stay that way, regardless of attendance areas while creating the new trustee voting lines.

“We are beautifully diverse, diffusely in Fremont, and we should have attendance areas that have the most negative correlation with attendance areas,” said former District 3 Fremont councilmember David Bonaccorsi. “It may not be a legal argument, but the community of interest is the school district as a public school system for everyone in the city of Fremont, not just my little elementary school in my backyard.”

“Candidates who in the past may not have been motivated to run in an at-large election might now participate knowing they will be campaigning in their ‘home’ district to voters who know them best,” said Superintendent Wallace. “Voters may now be more inclined to vote as there is greater chances to elect candidates they are familiar with.”

None of these maps are official and they will be edited before the final vote. Before the board votes on the final map, the FUSD Board Trustees will be holding two more public input sessions, one on Nov. 20 and the last on Dec. 10. Community members unable to attend the meetings in person are encouraged to send their comments digitally to the FUSD’s Public Information Officer, Brian Killgore.