Western Cartoons go to Infinity and Beyond 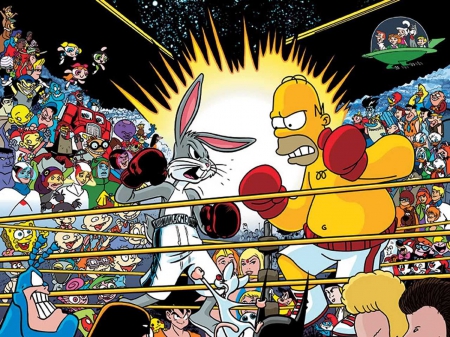 The age long debate over the superiority of Western cartoons and Japanese anime continues to this day, with entire friendships being torn apart over differences in animation preference. However, with legendary titles like SpongeBob and Gravity Falls that have received world-wide acclaim and popularity, Western cartoons are clearly better than Japanese anime. Western cartoons’ simplicity gives it many advantages, such as a lack of heavy reliance on translations and more inclusive demographic.

Very much known to most people, Japanese anime, due to being created in Japan, is written and expressed in Japanese. Since the average person, especially in America, can’t understand any Japanese other than the word “nani”, this means that anime must be translated to fit the western taste. These translations are usually done through subs and dubs, but these translations have their own set of problems. Dubs, or voiceovers of a separate language done over the original Japanese voices, are often choppy and awkward, with terrible voice acting. Animes like Dragonball Z and Sailor Moon are infamous for having actors either over acting or simply not fitting their characters at all. This voice acting can be extremely distracting for the viewer and lead to a decrease in quality for the anime. Because of this, people often turn to subs (subtitles) instead. Although subs don’t face the same issue of bad voice acting, information can be lost in translation, and this can confuse or distort the viewer’s understanding of the anime. While western cartoons suffer from similar language barriers, they are usually less complex in their storylines and don’t contain as much dialogue compared to anime, decreasing the chances of a  translation error. The huge popularity of Mickey Mouse and Tom and Jerry illustrates that despite language barriers, audiences from around the world can easily understand and appreciate western cartoons. SpongeBob has been translated into 50 languages and distributed in over 200 countries. Name one anime that’s more popular—I’ll wait….

… while we’re waiting, I’ll just mention that Western cartoons are also much more relatable for a wider audience, as anyone from any age or racial background can enjoy them. Family favorites like SpongeBob, PowerPuff Girls, and Adventure Time have achieved popularity around the world for a good reason. Classic western cartoons like these have humored generations of people and can be watched by adults and children alike. Anime, on the other hand, has specific plots and animation styles that cater towards more niche demographics. This reduces the anime’s entertainment value for general audiences, while cartoons can be enjoyed by all. ,

Despite the fact that anime has more coherent plots compared to many comedy-based Western cartoons, the lack of an interconnected storyline makes it much easier for people to watch and and skip in between episodes without needing to binge the entire series or understand a large amount of context. Western cartoons are designed to give people a quick laugh for a short or long-term viewing, so whether you’re an ardent or casual fan, you don’t have to watch hours worth of content to understand. Anime’s reliance on plot for entertainment makes it difficult to enjoy episodes without watching an entire series, which takes up hours.

However, western cartoons are not all totally devoid of complex storylines. If you’re looking for a coherent storyline,  consider watching Justice League, Adventure Time, or Phineas and Ferb, cartoons which incorporate coherent storylines with humor and heart.  Unlike many anime, however, most of the aforementioned series have episodes that don’t tie in too closely with each other, allowing for occasional, casual viewing.

At the end of the day, people who watch either Western cartoons and anime should still unite; after all, all of us are still for animation, as long as you acknowledge that Western cartoons are far superior. Disagree? Eat my shorts.