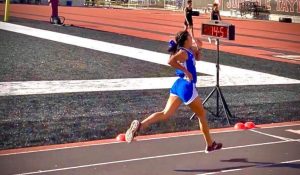 The team has been steadily improving throughout the season, with Captain Youan Khan (12) saying, “Just a couple of weeks ago, we had an especially bad race where we performed much worse than we’d initially expected. We’re definitely moving up and forward, and we’re constantly doing our best to improve.”

The Varsity teams ran a 3 mile course that Coach David Thomson says, “[…] was flat and fair, and easy to maneuver around. It was a fast course, which led to some really impressive times.”

Coach Thomson said of the competition, “The whole team stepped up against a very tough opponent and had their best meet against them in many years. It’s been a really impressive season so far. Very dominant wins for us through 3 weeks.”

This meet marks their third for the season, and their trajectory only seems to go up from here, with Coach Thomson saying, “This is turning into one of the best overall seasons we’ve had in almost 13 years. There is always room for improvement. Our runners aren’t anywhere close to their peak, and that is very exciting.”