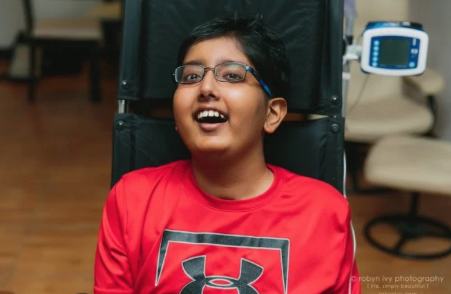 Ronil Mehta (9) smiling at age 13 for a photoshoot. Donate to Ronil through: https://www.gofundme.com/hope-for-ronil (Photo: Robin Ivy).

Jan. 7, 2016  began as a normal day for Ronil Mehta. Ronil went about his morning routine as usual when he suddenly experienced a severe stroke and fell into a coma. Moments later, he was in the E.R. Prior to his stroke, migraines and dizziness had been the extent of Ronil’s symptoms. After performing extensive MRIs, the doctors diagnosed Ronil with Diffuse Intrinsic Pontine Glioma (DIPG), an extremely rare case of aggressive, incurable brain stem cancer, which prevents him from speaking and walking. Following this diagnosis, the doctors predicted that Ronil had only 2 weeks to live and recommended that Ronil to be taken off life support. However, Ronil’s parents refused to lose faith in their son’s recovery.

“We said that we are not going to let him be,” Ronil’s mother, Manisha Modi, said. “He will fight through, and he will wake up. On the seventh day he opened his eyes.”

Once a month, Ronil travels to Mexico to receive a cocktail of drugs administered by Dr. Siller and Dr. Garcia at the Instituto De Oncología Intervencionista (IDOI) cancer center in Monterrey, Mexico. Due to the lengthy, bureaucratic FDA drug approval process in America, Ronil and his family, along with numerous other families across the globe, travel to this hospital, which has proved to make medical breakthroughs in the field of oncology. Moreover, Ronil’s extensive treatments cost over 20,000 dollars a month, and insurance companies have denied payments due to the experimental nature of the treatments. Today, 21 months later, Ronil’s strength and perseverance to overcome unfathomable circumstances serves as an example to the Irvington community.

Ronil, a freshman at Irvington, decided to enroll in two classes on campus, ASG and Integrated Science, in order to pursue his passion in education. Despite the hardships, his never-ending perseverance allows him to endure whatever obstacle he faces including his inability to speak

“He would come back from school and start doing his homework,” Ms. Modi said. “I would tell him to let me type or write for him, but he would say ‘no whatever I do, has to reflect what I do, not anyone else.’”

Ronil enjoys being surrounded by his fellow classmates and ASG members when he coming to school every Monday and Tuesday. Ronil doesn’t allow DIPG to hold him back from taking risks and seeking the most frightening roller coasters or sports. He loves baseball and spending time with his younger brother Sahil.

In order to spread awareness, ASG’s Service Learning Commission has set up fundraisers and raised approximately 4,000 dollars so far to cover the contribute to Ronil’s treatment costs. The Irvington community is encouraged to spread awareness regarding funding for pediatric oncology and to donate on Gofundme.com. Only by doing our part through awareness and fundraising can we progress towards better supporting Ronil, his family, and countless other families experiencing the effects of cancer and disease.