“Peter and the Starcatcher”: BEHIND THE SCENES

“Peter and the Starcatcher,” an entertaining and heartfelt play released by the Irvington Conservatory Theatre (ICT), opened on December 6 to a large audience. The play had 6 shows over the course of  a little over a week, and the 26-person cast, along with the crew, spent many hours to produce the best possible show. With lines, costumes, lighting, and other things to prepare, a skilled crew and cast were needed in order to produce this play. This production was quite successful, having an attendance of close to 300 students for the student matinees.

Assistant director Frankie Jensen (11) worked alongside director Mr. Ballin to produce the play. With so many factors to consider, like lighting and sound, which impacted the general mood of the play, Frankie had some difficulty managing all the elements.

“Tech was a little difficult to work with, like figuring out lighting and props and everything,” said Frankie. “Everyone wanted something different, so everyone had to get together to figure out what we want, argue a bit, and figure it out.”

Mr. Ballin worked with Jensen to adapt to the unique requirements demanded of the actors for the play.

“It was challenging to figure out how we were going to do certain kinds of scenes based on the environmental restrictions and we wanted to do as little as possible with props,” Mr. Ballin explains. “We were trying to do as much as we could with the actors’ voices and bodies along with sound and lights.”

The stage manager, George Bai (12) handled the technical side of the play by collaborating with the sound and lights team to decide when which effects were appropriate.  Due to last minute changes in cinematic effects, the stage team had some difficulties coordinating the changes but were still able to rehearse and be prepared.

Frankie Jensen applauded the cast and crew for the hard work that they put in throughout all the rehearsals, as well as the quality shows they performed to audiences.

“Honestly, they all work really hard, and it definitely shows. They look like they’re all having fun and really making people laugh. As long as everyone’s having fun, it’s a good show.”

The performers spent many hours practicing lines and cues during the show, as well as just their acting in general. Weekday rehearsals started since the end of September all the way up to opening night, and each rehearsal lasted 3 hours. As showtime got closer, rehearsals also got more intense, with some rehearsals lasting up to 9 hours.

The cast for this production consists of many of the performers including the leads were students attending different schools. Mr. Ballin explains that Irvington’s Performing Arts Club attracts actors from various schools.

“We are a performing arts magnet, so students from any school are welcome to audition and we cast on the basis of talent,” stated Mr. Ballin.

Jessica Haskin (12) played one of the leads, Molly, a starcatcher on a mission to destroy a chest full of stardust before it falls into the wrong hands. She enjoyed acting in the play due to the slight variation in the way the play was presented compared to other similar productions with the use of asides. Characters would often break and narrate scenes directly to the audience, while still keeping the action and emotions of the scene intact.

“I’d say [“Peter and the Starcatcher” is] very unique,” said Haskin. “ In fact, that’s actually one of the reasons why I really love this show. It’s very real and put on by us. We bring out the props and display the scene and narrate.”

Diego Sebastian China (12) played the part of Peter, an orphan boy who, along with his friends, are shipped off to be slaves in another kingdom. Diego has performed in many musicals but this was one of the first acting roles he took on. Although it wasn’t completely new to him, Diego faced some challenges while performing in this production.

“Figuring out his plot arc, when he takes off, when he is in his shell, and when he breaks [were] the most challenging part[s] of playing Peter,” he explains. “Commute [also] took a little while, since I go to a different school; about 20 minutes.”

Overall, plenty of dedication was needed in order to create the play, but the cast delivered by continually attending long rehearsals and adjusting to changes during performances.

Sound and lighting were extremely important when setting the mood for each scene. Slight changes were used to direct attention as well as invoke a particular feeling in the audience. George Bai (12), as stage manager, was in charge of these changes, and explained the purpose of each one.

“We will sometimes use the light to isolate a character and the spotlight will be the only light that is on. It will direct the audience’s attention to a specific person or event and sometimes we will use different color lights to enhance the mood or atmosphere,” he explained. “Sound is also used a lot for comedic effect in the show.”

“Peter and the Starcatcher” included plenty of fantastical elements, such as flight and fairies, that couldn’t be replicated visually, so other methods were needed to portray them.

“For the crocodile in the play that we don’t have, we used sound effects, as well as smoke, so the audience could imagine it being there,” George said.

With the dedication of the cast and crew, Irvington’s Performing Arts Club was able to display a fantastic production, “Peter and the Starcatcher” for hundreds of people to enjoy.

Isabella Lam, Staff-writer
Isabella (10) is a staff writer for The Voice. She joined journalism because she thought that writing articles would be fun, but it’s just turned into procrastination. Her hobbies include being a sweat in choir, watching Youtube, and being pessimistic online. 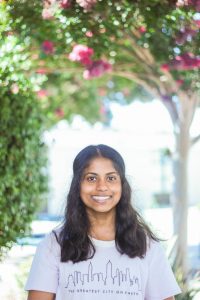 Anushka Nair, Staff-writer
Anushka (10) is a first year staff writer at The Irvington Voice. In her free time, Anushka enjoys watching Tasty videos, napping, and trying out new food places with her friends. Through journalism, she hopes to express herself and reach out to a large audience. She is thrilled to be part of The Voice and can’t wait to write for volume 28!