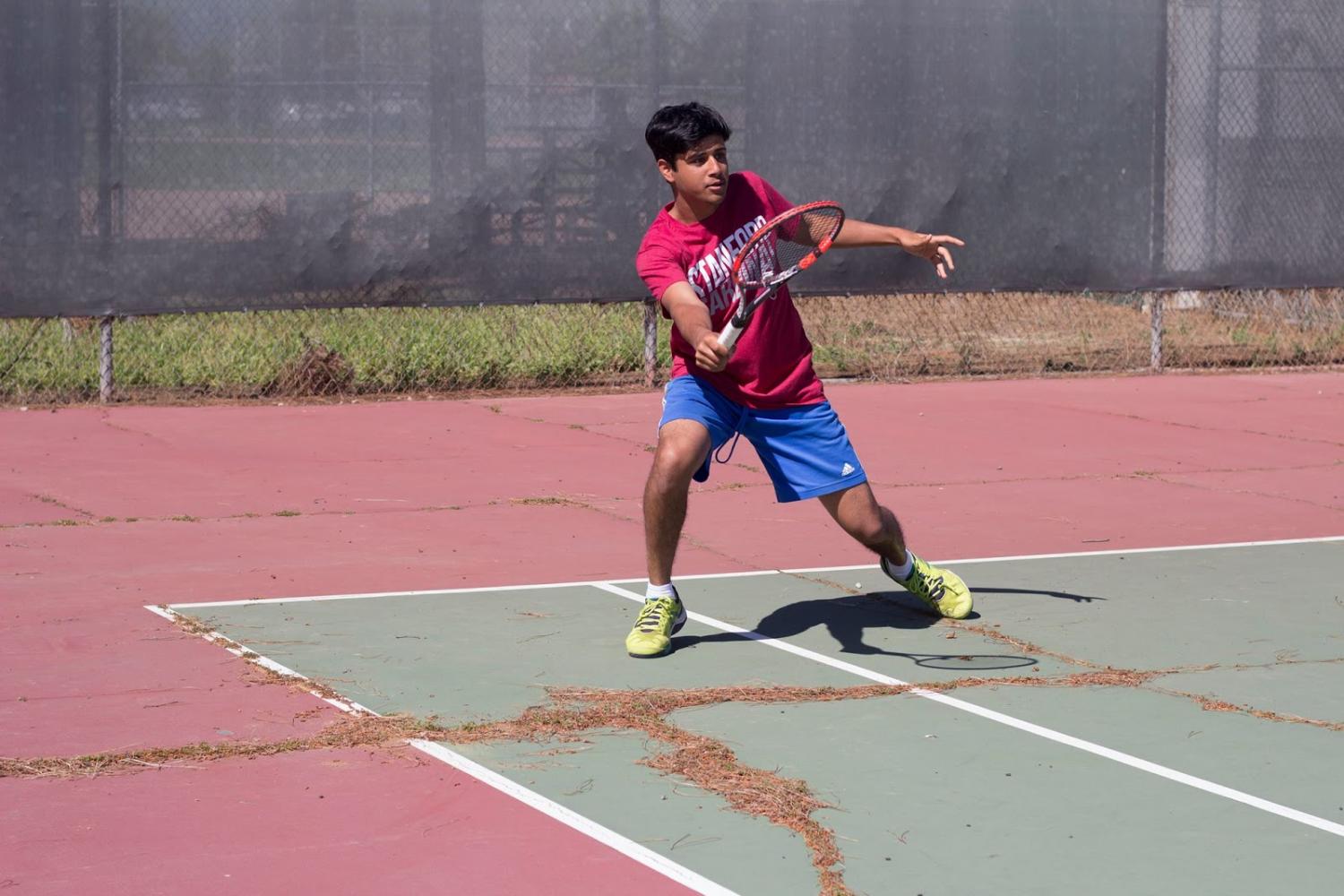 Co-captain Jay Pandit (12), a varsity singles player finishes a forehand during practice, stepping over the numerous cracks on the courts that haven't been resurfaced in 20 years.

Recently, a splurge of student athlete complaints has arisen regarding disproportionate sports funding for different sports, forcing several sports to require fundraising efforts or donations from their athletes. The financial troubles of the Athletics Department at Irvington has been an open secret for several years, but recent attempts to resurface the tennis courts or renovate the track have stalled, causing strife amongst athletes.

Sports like tennis, which rely on donations and fundraising for funding, face harsher financial troubles than sports such as football and softball. While football makes hundreds of dollars per home game in entry fees, tennis does not charge such gate fees. Recently, the tennis team had to request assistance from a Logan coach who donated the tools required to fix the nets for Irvington.

“Not even maintenance funding [for courts and equipment] is given,” said junior Marcus Soo, varsity doubles tennis player.

Tennis is currently seeking over $100,000 in renovation costs of their eight courts with long-term fundraising. Their courts have not been resurfaced in twenty years, and several deep cracks are evident throughout the courts, especially in the backcourts. Students nickname them “the grand canyon.”

The poor conditions of the courts as the cracks post a significant safety hazard to student who might trip over them in a fast-paced game.

A significant part of the problem is that not all families make the donations to sports programs.

“When I was coaching at Mission, I didn’t have to ask parents for donations,” said Coach Leon. “Parents automatically pulled out their checkbooks and paid $450 at the information meeting.”

Badminton faces similar difficulties with funding, despite being one of the most popular and successful sports teams, with almost 300 applicants and 75 active members.

The bigger problem, he implies, is that parents simply are not donating enough money to the sports teams. However, since badminton is a so-called “low maintenance” sport without referees, it doesn’t require much money to continue operating.

On the other hand, sports, such as softball, tend to face less financial problems. Ken Campbell, the varsity softball coach, stated that softball used to be in tough financial troubles, but successful fundraisers and low costs have improved their situation.

“Kids can still play without paying… and the district will cover [the remaining] fees,” Coach Campbell said.

More and more California schools are forced to operate sports programs on less funding as a result of the cut to Proposition 98, which requires a minimum percentage of the state budget to be attributed to K-12 education funding. As a result, FUSD expects to lose $191 per student leading to a net loss of $6.3 million in state funding. In order to survive, sports programs may need to rely more heavily on donations.

Under the current system, student athletes are asked to donate $60 to the Booster Club, $50 to the district, and $30 to the Irvington Athletic department, a total of  $140. The Booster Club donation is split evenly between all the sports, paying for two tournaments per sport team and for half the cost of football and basketball uniforms.

The district donations go toward the approximate $10,000 fees needed for Irvington to join sports leagues like Mission Valley Athletic League before schools start, and more fees to Northern California Section League as the year progress. The district itself pays for the coaches’ stipends and reconditioning of sports equipment. Any money from rentals of Irvington’s facilities goes directly to the district. According to “The Mercury News,” the district plans to repair or replace all five Fremont Unified high school swimming pools. Measure E, a $650-million bond approved by voters in 2014 to make repairs and improvements to district schools. Currently, the district is working on remodeling Mission’s pool at a cost of $4.2 million. Irvington’s pool is set to be renovated in 2019.

The athletic department earns money through gate fees, student donations, advertisements on sport schedule posters, and ASB stickers. The department splits the gate fees and donations proportionally between all the sports, paying for referees and umpires. Football and basketball teams are given more money than other sports because they require more money to operate and they put more money back into the program compared to other sports. For football, the four referees cost $120 each. On the other hand, badminton requires no referees and is largely self-sufficient. As a result, the sport barely gets funds from the department. Sports who require sports officials receive more money from the department than those that can do without.

“Help raise more money. Come to the games and support. That way students are supporting both the athletics departments and the team.” – Irvington Athletics Department Director Mrs. Stone

With only one home game for football next year, a major source of funding will be cut. Decreased department funding could further decrease the amount available for sports programs. While possible recommended solutions range from increased donations to an expansion of the ASB sticker program, the main remedy to the problem is through increased private donation and participation. 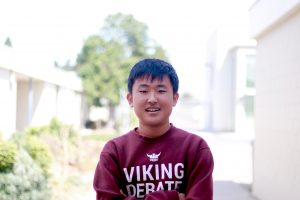 William Yoo, Staff Writer
William (11) is a staff writer and opinions apprentice for Volume 25 of The Irvington Voice. He loves good discussions, reading, and philosophy. He's also a nationally ranked debater and VP of the debate team. In class, he'll probably be studying for the calculus test next period or editing endless articles. Was a cynic, then an idealist, now unsure. 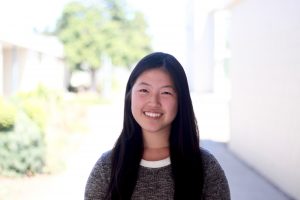 Caitlin Chen, Editor-in-Chief
Caitlin (12) is editor-in-chief and opinions editor of The Irvington Voice. She was opinions editor in her junior year, and she was a staff writer and news apprentice during her sophomore year. This is her third and last year on the staff. Being in journalism hasn't fully crushed her spirit, so she wants to pursue journalism as a career when she graduates from college. She is expecting to make very little money.

She likes watching The Office on repeat and wasting a lot of time on Instagram. She also likes taking naps and baking. If you wish to make brownies, she highly suggests this recipe: http://allrecipes.com/recipe/143667/brookes-best-bombshell-brownies/