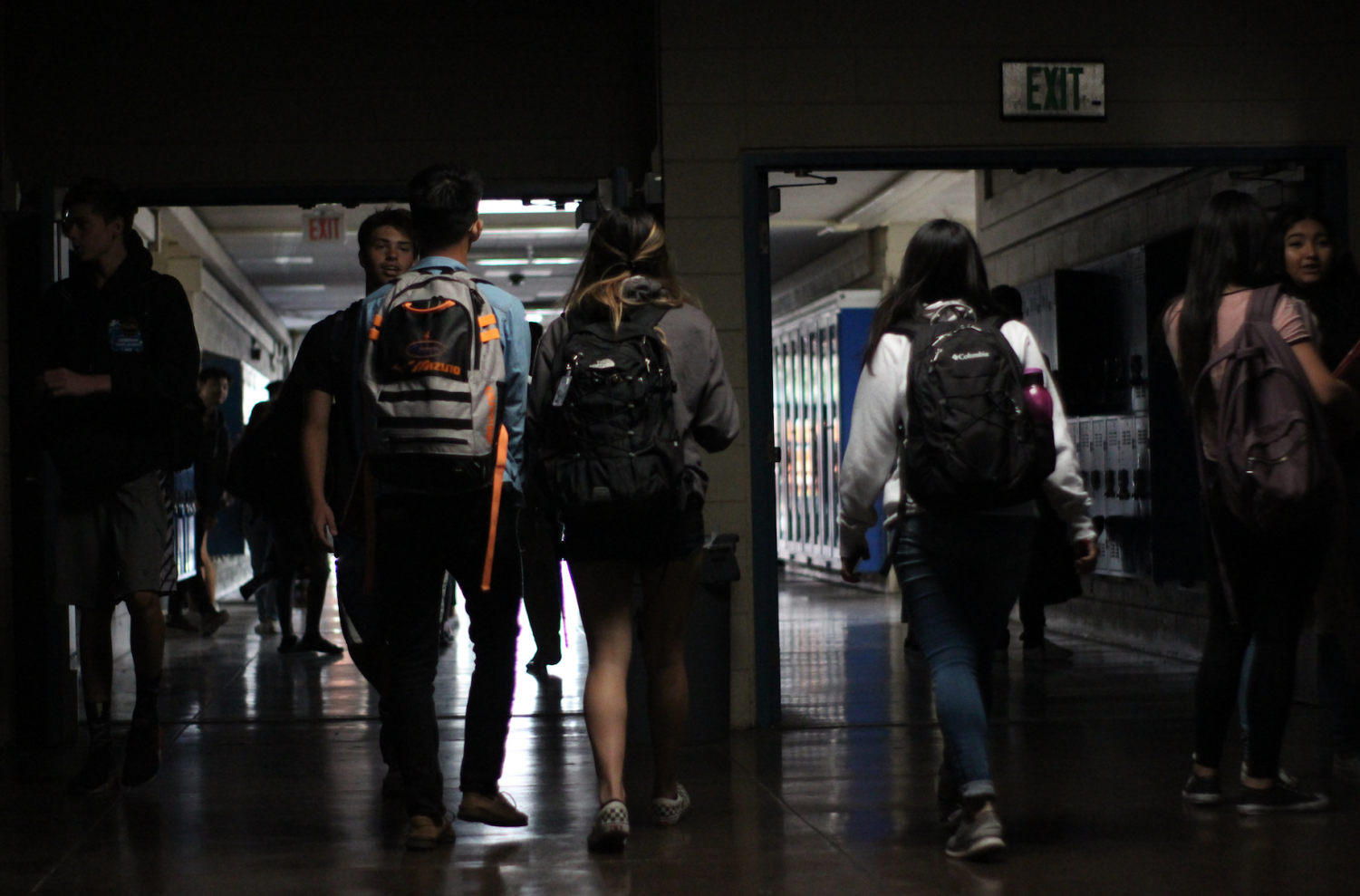 Irvington students and staff creatively coped with the power outage and its peripheral issues including loud construction sounds and diesel smell from onsite generators, as PG&E professionals committed to uncovering the once-hidden cause for the school-wide blackout. (Annika Yong)

Irvington students and staff creatively coped with the power outage and its peripheral issues including loud construction sounds and diesel smell from onsite generators, as PG&E professionals committed to uncovering the once-hidden cause for the school-wide blackout.

On Thursday Sept. 27, a traffic accident involving a car collision with a utility pole in the Irvington District caused a power outage in the area, including Irvington High School, Robertson High School, Grimmer Elementary, and Harvey Green Elementary. While PG&E fixed the initial issue and restored power to other areas, an old, lead-based power line located underneath the horseshoe parking lot failed to withstand the surge of returning power.

“That’s the failure point in the front lawn area,” Nicholas Chapman, the IT Support Specialist at FUSD, said, pointing to the lawn in the horseshoe. “The juncture box out here in the middle of the street, that’s PG&E. The cables [are] the district’s responsibility to replace, so they’re working on replacing them now. They’ve already pulled out the old ones and are working on seeing if the conduit is still good.”

Most wires powering Irvington are modern, copper-based wires. However, the power line responsible for the schoolwide power outage dated back to when the school was first built.

“The cable was replaced in 1958, and it is a lead-based cable,” Chapman said. “It’s passing 12,000 volts through it. All that power generates heat, so the cable is melting and reforming over the years.”

On Thursday, teachers were initially unaware of the scope of the outage and temporarily adapted lesson plans and activities. Various teachers moved students out of the classroom to study on Thursday Sept. 27 and Friday Sept. 28, and students in classrooms moved desks near windows and doors for the natural light.

“I really didn’t like the power outage because we still had to go to class with no lights on. They shouldn’t make us go to school with no lights,” Junior Lauren Nhan said. “On Friday, during first period, we had to do art in the dark. Since it [is] cold in the morning, we all had to bring extra jackets because none of the teachers could turn on the heater.”

The district provided generators on Sunday, September 30th, procured only for critical services, such as Internet for the office and light for majority of the school. However, some classes, such as room 42, remained without light for the entire week to follow.

“The computers [were] shut down because we [didn’t] want to risk having a surge that would fry all of our equipment.” Todd Gutierrez, Lead IT Support Specialist at FUSD, said.

While some students were thankful for the light powered by the generators, common complaints vocalized by students about the generators were the loud sound and the pungent diesel smell.

However, the main concern for the maintenance crew on Monday Oct. 1 was the forecast of rain. In the past, rain has seeped into the hallway at Irvington—especially due to leaky roofs. As a precaution, blue tarps covered the generators on each side of the campus, as well as the power supply closets.

Although the power supply was fixed on Friday, Oct 5th, the generators were kept running just to ensure that there would not be a power surge while the district maintenance crew worked to fix the cable.

“The generators are being refilled every day automatically by a company, so we don’t really have to worry about them going down or losing fuel,” Gutierrez said. “The longer they run, the more we have to spend.”

The generators cost the district approximately $6,000 per day, which came from the general fund. This price did not include fuel.

“The district is currently working with PG&E to make a determination of responsibility for this incident,” Brian Kilgore, the FUSD Public Information Officer, said. “Depending on the outcome of the investigation, the district may seek reimbursement from PG&E.”

“[The power outage] was a big bummer. We had a full set of acts from this school and various others,” said Mr. Ballin, the PAC adviser. “It would be impossible to hold a [microphone] in here at nighttime without power.”

While events such as PAC’s Open Mic Night were cancelled, the District provided basic necessities throughout Thursday and Friday. For example, they supplied the office with analog phones and portable chargers to ensure the school would be able to communicate in the dire case of an emergency.

“Student meals for Irvington and the sites served by Irvington cafeteria were prepared at Kennedy High School and delivered,” Superintendent Kim Wallace said via email.

Superintendent Wallace and Principal Melsby both praised the parents and students for their resilience and flexibility, despite the extent of the power outage. Through the duration of the power outage, the principal sent out several emails updating the Irvington community of its status.

“I would like to commend the Irvington students, teachers and classified staff for their flexibility, creativity, cooperation and positive attitudes, which helped keep the site running smoothly,” Superintendent Wallace said via email.