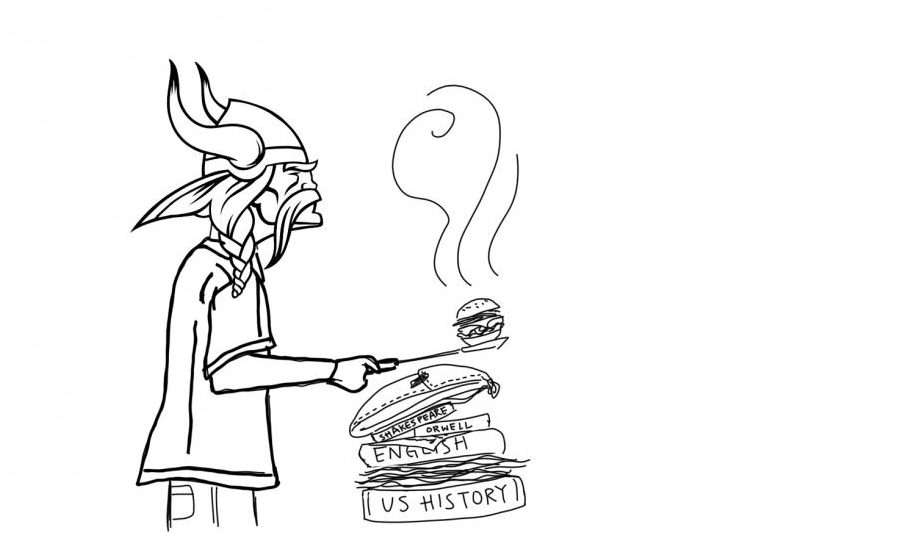 Vikings in the Workplace

Why did you choose this job?

Before this I worked at McDonald’s, but I wanted to serve a new customer base and work in a more casual environment. Even though it was just McDonald’s, my manager took it so seriously which didn’t suit me since it was so uptight. Happy Lemon still has busy hours, but I chose it because it has a more easygoing environment. I now work as the cash register and make the drinks.

Funniest thing that happened during work:

The simple drinks because I won’t mess up. I would say Green Tea with salted cheese.

I hate making drinks that involve blenders, because I don’t know the exact recipes and the process is really slow when I need to check the recipe.

I like the environment at Happy Lemon. The workers are really nice. Sure, there are busy hours but overall, it’s really chill. We also sometimes make our own food at the back. Someone even brought a raw fish and made soup. Am I allowed to say that?

When people hear salted cheese they think it’s actual cheese and it sounds really gross. I had that first impression too, but it’s actually cream cheese and it’s actually really good. Also if it’s your first time here or if it’s not too busy you can ask for free samples and try almost anything.

Sometimes when the store is not very busy we practice flipping empty boba cups. And sometimes we have karaoke. I have worked in Starbucks for two years. At work I either train someone, make drinks, or deal with customers. Working at Starbucks is really mellow, but since      we are surrounded by high schools and junior highs we have to make sure kids don’t steal anything.

Grande Flat White. It’s like a latte, but you have to mix foam and make a perfect circle in the middle, and it takes skills.

A frappuccino. They are so time consuming to make, especially when there’s a line of frappuccinos when it’s frappy hour.

Something we don’t know:

We have a lot of racist customers and they would yell at you and we can’t say a thing about it or defend ourselves. I have gotten into arguments with customers but again, I can’t refuse service or talk back to them.

It was around closing time and a homeless person broke a beer bottle inside the store, and waved it around the customers. We had to call the police; it was really bad.

Best Part of the Job:

My coworkers! Although there aren’t many high schoolers working at Starbucks and most of them are in their twenties, we all get along pretty well.

Use Mobile Order instead of waiting in line, especially during after school hours. Try to be nice with baristas. At the end, what we tell ourselves at the end of day is “it’s just a cup of coffee.”

I work for the City of Fremont and was hired over the summer as a musical theatre camp counselor. I enjoyed it and my boss ended up liking my choreography so much that she hired me to teach dance year-round. I teach ballet and tap to two to three-year-olds and ballet for four- to seven-year olds five hours a week and prepare them for their performances. (They had a winter performance which went really well in Niles Veteran Hall. We also have performances at Lake Elizabeth and a recital at Ohlone.)

Seeing the kids progress over the classes. In the beginning, there was this one student who was really shy and by the end she was really excited to perform. I was really proud that I was able to break her out of her shell.

In my two to three- year-old classes during a performance, a toddler slipped, but she just got up and kept on dancing, and she was going so full out: she was shaking her hips and nodding her head. I loved her energy so much and her passion for dance really showed.

Something you took from the job:

Patience, for sure. Teaching two to three-year-olds is very difficult, and you really need to capture their attention because they have really short attention spans. So I kept the classes fast-paced and always kept them doing something hands-on.