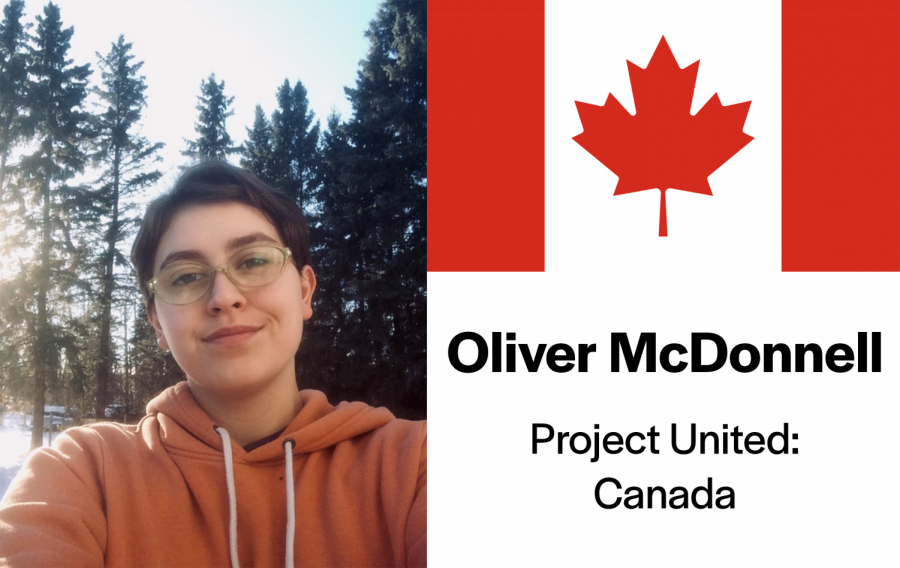 My name is Oliver McDonnell and my school is in Edmonton, Alberta. The school is J.H. Picard. Depending on the province, some schools shut back down again, but pretty much everyone’s back to in-person learning. For us, we had one case at the beginning of the year, and I think we recently had a second one. But that’s about it.

My first thought when we went into distance learning was this is gonna be great. I didn’t have to go out anywhere, and I’m more of anti-social person. I have to say the extra time I got to sleep in was great, and really just staying home was good because I could just be in the comfort of my home, have my video calls, get food when I want.

And then most people came back to campus at the beginning of this school year. I was originally doing school from home because we have an option to come back. I was expecting the at-home stuff to be the same as what it was during last year, but it wasn’t. Back when it was full virtual learning, it was actually really good because everyone was at home, so everyone would go into the same video call. After people got the option to come back to school, which most people did, the online stuff went downhill. The teachers basically just gave us the stuff and said, “Have at it. Ask any questions if you have them.” So I ended up having to come back because, you know, grades.

Some teachers are better than others at adapting. Some actually had lessons where they actually taught you; others did not. Some teachers did video calls, where you could hear them and watch them as they’re teaching the class so it’s like you’re also there. But other teachers, they would not do that. They just gave you the material and it was basically teach yourself.

Another big issue I had: I live in an area slightly outside of the city, and they’re doing construction around that area. Then one day, they ended up cutting our telephone Internet line. So we had no internet. We basically had to use a spare phone, rush to the phone provider, and get unlimited data. So I ran on data for the next two weeks.

But living here, I think I have it better than a lot of people. During the time of being at home, I always thought I can’t imagine what this would be like for people who live in apartments because I have about three acres of land. So I can go out and walk in the forest or something without leaving my property. A good habit I picked up is I tend to do exercises daily; I started that during quarantine and it’s just continued on. I’m more alert now, I’m getting better sleep than I used to.

At the same time, we have a lot of stuff to do. We found that some of my close family members got very lonely during this time. So they’re asking to see us and talk to us more than they used to, which has been good. We can’t get together all the times they ask, but we’re trying. They still live in the city, but it’s pretty difficult. I live with my aunt, we’re always extremely busy, usually with housework. Recently it was getting ready for winter because we need to do a lot of stuff before the first snowfall came. Then it’s also a lot of work with all the pets I have. And then schoolwork on top of that.

Getting ready for winter is a lot of yard work, raking up leaves and stuff because if you don’t and the snow comes, then the leaves decompose. Then by summer, it’s just not great—a ton of mold basically. And it’s small stuff like insulating the windows, making sure everything’s closed. Checking the gutters to make sure they’re functioning properly. Putting away things from the summer like tractors and stuff—I call it a tractor but it’s more like a lawnmower that you ride. It’s pretty big though. I’ve ridden on it quite a few times. It’s for cutting the grass so it’s way easier than using a pushing one. Even with the tractor, that still probably takes about two and a half hours to do with the land we have.

With pets, we have seven animals in total: four dogs, three cats. Two of my cats are hairless. It’s mostly just spending time with them, playing with the ball, brushing them because they shed a lot, feeding them, vacuuming twice a day. Three of our dogs are working dogs. They sniff out bedbugs, so we often get jobs with them as well. It is a lot but they’re all well-behaved so usually not bad.

Besides that, drawing and writing are a big thing for me because I find it’s a way to relax and express yourself and have fun. When this whole thing started, I found myself having more time to draw. And I quite like that because it gave me time to improve my art and do more anatomy studies, which is something I never had time to do before being at home. I had time to just improve on what I was originally working on.

There’s also a few TV shows we’ve picked up as a family to relax together. Recently, we just finished a Netflix show called Burden of Truth. That was really good. It’s kind of a mix of using Netflix, Amazon Prime, and satellite TV.

During virtual learning, Sunday was really the get ready for school day and also the day to normally either relax or do work around the house. Then, Mondays, as well as every other day, I get up for school around 9:30 AM. I had my first class at quarter to 10, so I basically just got up, got something to eat, sat down, turned on my computer, and have video calls. Have that throughout the day until about two o’clock when my last class ended. Then the nights were used to study, followed by making supper and then sitting down on the couch to watch some TV.

Now, with in-person learning, Monday and the rest of the week are getting up around 6:30 AM and getting to the bus by 7:10 AM. Then I get to school around 8:30, have my spare till 10:30, and have my classes. The school ends by quarter after three, but I don’t get home until a bit after 4:30. By that time, it’s studying for a few hours, having supper, maybe sitting down for an hour of TV while I eat. Then shower and go to bed. Definitely a lot less time.

I’m also a senior, and I actually haven’t started my college apps exactly. I know the places I want to go, I just haven’t started yet. I’m also probably going to take a year off. The only thing that has changed with the process is that open houses and stuff are different. Most open houses now are actually virtual tours, which is kind of interesting.

I’m planning on probably doing my first two years in the city at U of A, University of Alberta. And then after that, I plan to go into ophthalmology in Waterloo, which is across the country. I’ve been looking at international schools, but I’m not sure yet—especially because if I stay here, I’m getting my Metis status. It means if I stay in the country, I’ll get free post-secondary.

When Europeans came over, and a European and a first nation person had a child, they were called Metis. You have to first prove you have Metis blood. And then it’s usually an eight month waiting period for them to do all the paperwork and everything.

For me, the big benefit is free post-secondary, so I wouldn’t have to pay for anything in university or college. Fishing, hunting, stuff like that, those things you’d have to pay for and have licenses for. But with Metis status, you get them for free. The thing is it’s very hard because you have to prove that you had ancestors that were Metis from two very, very specific areas in the country.

Going back to the topic of international stuff, your United States election affected us as well. Our economy went downhill. Here, when you drive around, you can tell just by looking at the gas prices. My province is known for gas and oil, that’s our main piece of economy. So when the country’s economy goes down, our price of oil goes down. Not as bad as when COVID first started; when COVID first started, gas prices dropped to a number we have never seen. It was around 50 something cents a liter. The lowest I’d ever seen in my life was 70. They were even talking about our province going into a possible depression because of it. That’s my province’s main source of income. We’ve recovered, but with the US election, of course, we dropped a bit; but it’s only about 78 cents, which is okay. Normally it’s between $0.85 to $1.