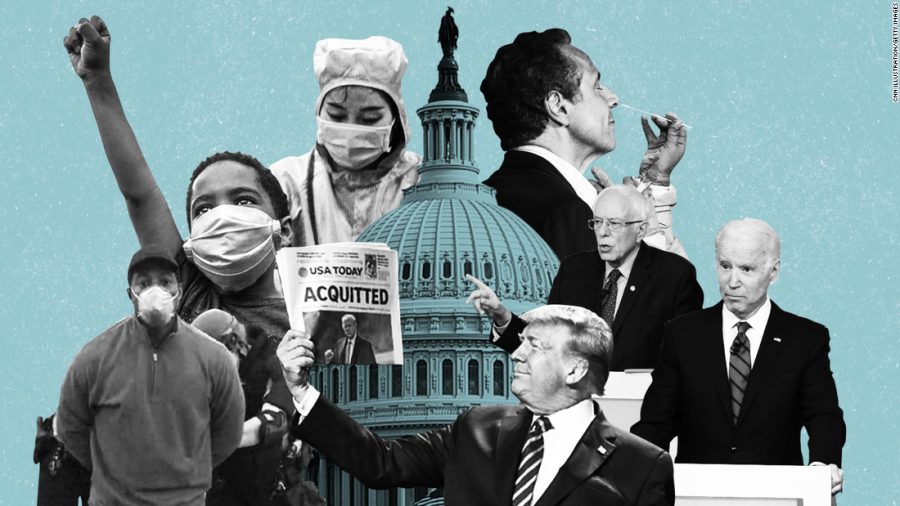 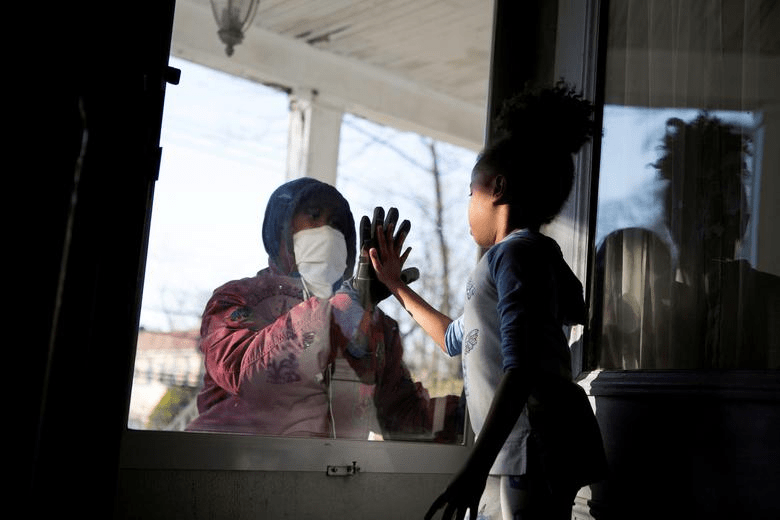 An essential worker in the healthcare industry meets his daughter through a glass window while maintaining a safe distance to protect his family from coronavirus.

2020: One of the Most Destructive Years Yet

2020 was a pretty devastating year. Ranging from the Australian bushfires at the start of the decade to the explosion in Beirut that shook the world, last year felt like a decade’s worst moments were packed into one. Not to mention riots exploded in Delhi over the Citizen Amendment Act, a U.S. drone strike at the Baghdad International Airport killed the Iranian general Qasem Soleimani, and the World Health Organization reported six new cases of Ebola since preceding years. However, the defining feature of 2020 is the pandemic that started to spread around the globe early January, and infected 83 million people worldwide by December 31, 2020, according to John Hopkins University.

The COVID-19 outbreak has taken the world by storm and numbers grew at staggering rates each month in 2020. NPR reports that the U.S. ranks highest in both its total reported case count of near 25 million and its death toll of over 420,000. China, where COVID-19 had originated, managed to contain the spread of the coronavirus, along with South Korea and Vietnam, thanks to federal government protocols that limited public gatherings and promulgated social distancing measures. However, even despite severe precautions, all countries were ravaged to some extent.

Arguably, the most heartbreaking impact the coronavirus has had is on the healthcare industry. Both private and public forms of healthcare suffered as hospitals were overtaxed with patients and the number of people who needed acute care skyrocketed. In addition, as increasingly more people became unemployed, location-based practices dwindled and providers in concentrated rural regions were laid off. This heavily impacted both the economy and the livelihood of such previous employees because they significantly relied on their income to provide basic food and supplies for their families.

On the front lines, nurses, practitioners, and physicians spent countless days and nights working in designated highly contagious zones. As thousands laid sick in hospital beds, many more healthcare workers put others’ lives before their own, occasionally even fighting to save the life of a patient who was infected because of their own carelessness. Furthermore, the federal government attempted, but repeatedly failed, to place rigid and time-appropriate guidelines and traveling restrictions. This lack of control, coupled with groups of Americans touting anti-mask propaganda and failure to obey social distancing guidelines, exacerbated the transmission of the virus around the country. As a result, millions got infected over weeks and the year finally came to a much-needed end, although not without reaching the grimmest single-day total in the year at 3,800 deaths.

Some may argue that the pandemic brought about unexpected benefits such as the opportunity to gain valuable insight on climate change controls and vaccine production. However, in my opinion, pandemic-induced stay-at-home orders are not the only way to control variables such as human activity. Rather, governments or controlled regions can limit public interactions for the purpose of measurement and conduct research that way. In terms of the scientific community gaining practical experience and exposure to distribution measures, we have already been doing so for countless years because of other viruses – the flu shot for the Influenza Virus and the chickenpox vaccine. Another notable plus to 2020 was immense political participation during the election, however, I would attribute this to a rise in overall civic engagement because of Generation Z. Therefore, any pros of 2020 do not outweigh the insurmountable detriments brought about by coronavirus. 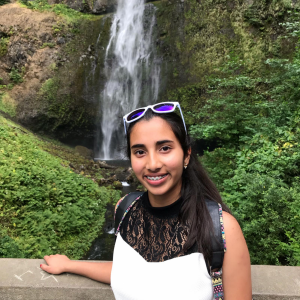 Shivangi Gupta, Entertainment Editor
A rising senior at Irvington, Shivangi (12) is thrilled to be the co-entertainment editor alongside her friend Kritika Sachar (12) in her second  year at The Voice. Having an addiction to cheesy romcoms and free-form dancing, the arts and anything creative (or bizarrely unique) catch her eye. She loves food and considers herself a self-proclaimed “broke-but-still-a-foodie” kinda girl.  Definitely reach out to her on Instagram (@shivangig24) or snapchat (@shivangig24) since she loves meeting new people and making worthwhile friends! 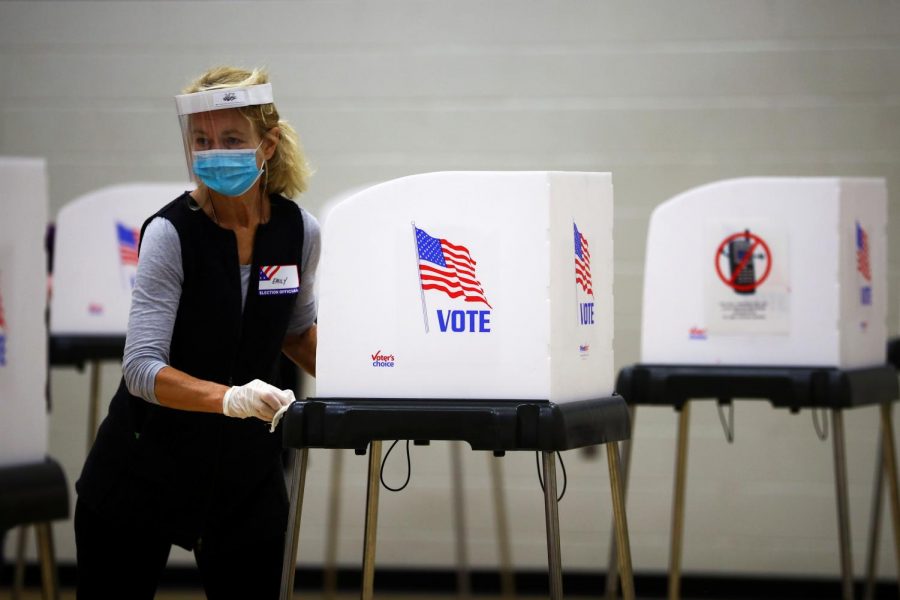 For this year’s election, poll workers worked harder than usual to disinfect voting booths across the country, so that Americans could safely cast their vote.

Was 2020 a rough and stressful year for every single one of us? Of course. Did we face challenges we never would have imagined facing before? Absolutely. But, despite the dreadful COVID-19 pandemic, were we able to pull through, overcome, learn and grow as fellow human beings? The answer to that is a resounding and emphatic “Yes!”

Ever since it began spreading, the COVID-19 pandemic has taken far too many lives and has greatly impacted the economy. But, though it was disruptive, it did have many positive side-effects for the whole year. When lockdowns and quarantine mandates were initiated all around the world, human activity decreased significantly. Roads were mostly empty as most people were not going outside unless absolutely necessary. This trend has created many positive environmental effects, especially in urban areas. According to BBC’s Future Planet, carbon dioxide emissions decreased by 5-10% in New York City, and even up to 25% in parts of China. These conditions, with lower pollution and better air quality, provided valuable data to climate scientists. According to an article by Chemical and Engineering News, “having real-world data to confirm their predictions will […] be persuasive to policy makers”. This data will be invaluable and crucial in scientifically combating climate change, which is an extremely urgent issue; it causes hundreds of thousands of deaths annually and will keep damaging the entire planet’s ecosystems. Furthermore, this data will also help convince government officials, policy makers, and climate change skeptics of the urgency of climate change and other environmental issues.

When the COVID-19 pandemic started growing exponentially around the world, the scientific community faced an enormous challenge: creating a vaccine against the virus. Developing vaccines is an extremely complex process and historically has taken massive amounts of time, money and effort. According to Nature Research, “[before this pandemic] the fastest any vaccine had previously been developed, from viral sampling to approval, was four years, for mumps in the 1960s”. However, pharmaceutical companies Moderna and Pfizer, just months after their first human trials, announced positive results in November and got their vaccines approved by the FDA in mid-December. Before the year even ended, healthcare workers and other high-priority groups had already been administered the vaccine. This rapid development was aided by an international effort to develop vaccines, with BioNTech, a German company, working with Pfizer, and American one. Not only are these cooperatively and rapidly developed vaccines necessary to combat COVID-19, they will undoubtedly be invaluable for future vaccine developments.

As the year came to a close, the United States apprehensively waited for an important moment. The presidential election of 2020 had many obstacles in its way, including social distancing at all polling locations and massive numbers of mail-in ballots. Despite these obstacles, Americans felt motivated to do their civic duty and two-thirds of eligible voters in America cast their vote in 2020. According to The Washington Post, it was “the highest turnout since 1900, when 73.7 percent of eligible Americans cast ballots.” This election reveals a shift in politics, with the arrival of a newer generation that is more politically active and more socially aware than ever before. All in all, this year has shown us that voter turnout and awareness of the elections is bound to increase in the upcoming years, especially as conditions improve and pandemic restrictions go away.

2020 was certainly not an easy or normal year, but the lessons we learned and knowledge we gained was invaluable. Although lockdowns restricted our social gatherings and events, the unique environmental data that was collected will be crucial for climate scientists. Even during unprecedented logistical challenges, the 2020 election saw historic voter turnout, which is undoubtedly a positive sign for the future. The rapid speed and efficiency at which vaccines for COVID-19 were developed not only proved how strongly humanity can rise to the challenge, but served as an excellent foundation for future vaccines. Despite the massive challenges and curveballs that came our way in 2020, we managed to pull through together. In memory of all the lives we lost in 2020, and after all we have overcome and learned from, we hope to see a brighter world in the future. 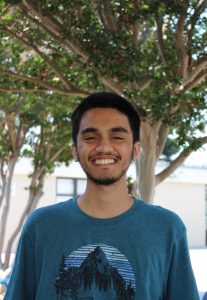 Jay Phatak, Broadcast Editor
Jay Phatak (12) is Broadcast Manager for The Voice, running the podcast in his second year working for the newspaper. Since he already has too much writing to do as a senior, he would like to edit podcast episodes rather than articles. When he has free time, he likes to beat people at chess, or take photos of the cute hummingbirds that come to his patio.